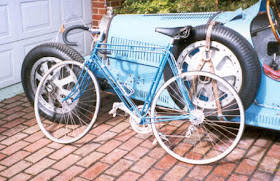 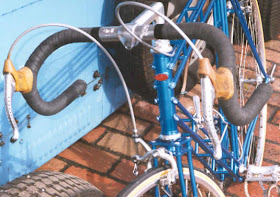 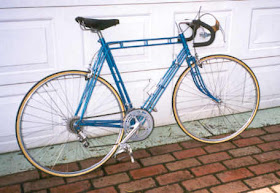 This is an interesting story that I've pieced together from several sources and based upon information that has recently come to light. Read on.....

Ettore Arco Isidoro Bugatti was born in Milan on 15 September 1881 and at the age of 17 he joined as an apprentice the bicycle and tricycle manufacturing plant of Prinetti & Stucchi. He is the Bugatti that went on to become the legendary engineer and designer of the most famous Bugatti sports cars, the founder of the Bugatti car manufacturing plant, and one of the forefathers of modern automobile engineering.

In 1913 he designed a very unique, space-frame, bicycle which was never produced. The drawings for this bicycle were provided to Californian Art Stump in the 1970s by a noted English Bugatti collector who commissioned him to build a bicycle based on the drawings. Art Stump built one for that collector, and one for himself as well.
A source tell me, "Art probably updated the design somewhat from the Bugatti drawings I have seen, going with steeper angles. Art had a drafting table, so redrawing a bike and figuring out the missing details would not be that hard to do. Note that the Stump Bugatti uses Art Stump's cast rear dropouts, elegant but a bit thin."

The Bugatti bicycle that Art Stump built for himself recently surfaced with the owner saying, "He sold his own Bugatti bicycle to my father who had shown an interest in the first (one built). This bicycle is the 2nd of the Bugatti bikes." This is a photo of Bugatti no.2 by Art Stump: 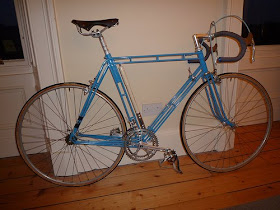 The owner went on to say, "They are both fillet brazed steel frames and due to the complicated nature of the construction with all the tubes and cross members, the frames took 1000 hours each to make! The problem was resetting the jig and all the alignments after each application of heat. I inherited the bicycle from my father, a noted Bugatti man, himself....the sister bike is also in the UK."

Art Stump also made only, approximately, 10 traditional diamond design frames that are highly thought of by collectors for their lug work and drilled components.

Photos: the first three photos were found on the Internet without specification as to whether it was no.1 or no.2 by Art Stump; the last photo is of no. 2 (ed. note; UPDATE! I've been in touch with the owner of no.2 and he writes, "I note that you found the Internet pics of another Bugatti bike also. That may be Bugatti bike number 1 by Art Stump but it looks more like the third one that was built sometime later and not by Art Stump. I know the other Art Stump bike also and I do not think the pictures are of it. I also am sure that a third one was built sometime later by am unknown but obviously skilled enthusiast and I think those are the pics. Notice the cross members on the forks and not on my Art Stump one. As I said I think this is the case but I can't be sure. I will get some pics of the other Art Stump Bugatti bike and get them to you sometime."