This entry will be the collection point for information on cycling monuments, memorials, plaques, etc., which are dedicated to Italian riders and others in, and outside, of Italy. There are probably more of these than I can imagine. I am aware of quite a few already but please contact me with information that you may have. The information about cycling museums in Italy is contained here. 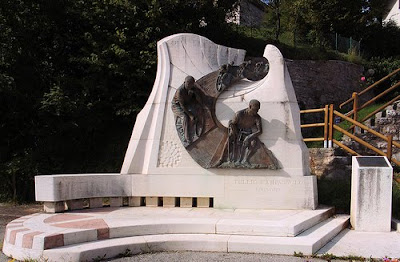 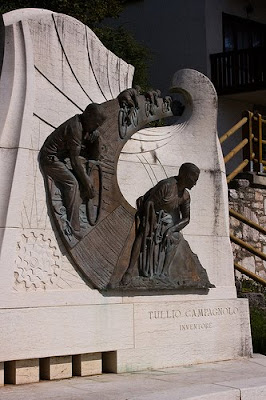 Tullio Campagnolo Memorial, unveiled 1995
Location: Passo Croce D'Aune (Belluno province)
It was during one of Campagnolo's races as an amateur that he confronted a problem which often faced cyclists of that period, removing a wheel in order to change gears (wheels had one gear on each side, one a climbing gear; the wheel would be removed and flipped). On November 11th, 1927, with snow covering the roads of the Croce D'Aune Campagnolo needed to remove his rear wheel to change gears. Because the large wingnuts that held his wheel on had frozen and his hands were too cold to budge them, he was unable to remove his wheel to change gears, and lost his chance at victory that day. As he struggled to free his wheel, he muttered five words to himself that changed the history of cycling: "Bisogno cambiá qualcossa de drio!" Those words ("Something must change in the rear!") and that simple event -- a wheel that couldn't be removed -- started Campagnolo thinking. He went back to his workshop, and emerged with the invention of the quick-release lever (in 1930) and, soon after, an early bicycle derailleur (1933). 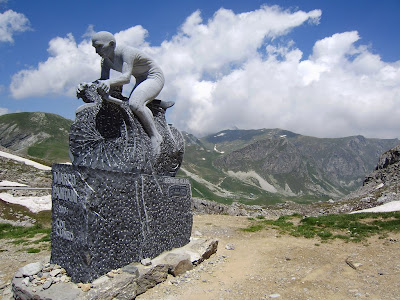 The Marco Pantani memorial on Colle della Fauniera, also later named Colle Pantani, a climb first used in the Giro d'Italia of 1999 and on which where Pantani retook the leader's jersey.