My thanks to Marco Mori for sending in this story about his search for a L'Eroica eligible bike. Marco's cycling passion began as an 11 year old when in 1971 he saw his first professional race with Eddy Merckx, Gianni Motta, Franco Bitossi, Felice Gimondi and many more. After a career in the travel industry he decided to start his own cycling tour operation, GustoCycling, in 2009.

"Gian Bohan and I have been wanting to participate in a cycling event called L'Eroica in Chianti, located south of the beautiful rolling countryside of Siena.

I was attracted to this event after first reading about it in a cycling magazine five years ago, I kept the feature as a reminder to myself that one day I'll go and check it out. What struck me when reading the feature was it's uniqueness, nothing quite exists or compares in the world with this one day cycle event. I realized after reading the article that not even the many E'tape du Tour or Gran Fondos that I had participated in over the years would compare with this event. 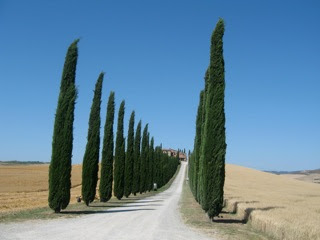 Giancarlo Brocci, a hotelier from Gaiole in Chianti, was the instigator with 3 others to organise the bike event they called L"Eroica. It's purpose was to replicate the experiences of the golden age of Italian Cycling of the 40's and 50's
by cycling on the white gravel roads of the Chianti region as Coppi and Bartali had previously done.

This event has grow enormously to the point now that it's over subscribed. The success, in part, is down to key points of participation: as a minimum you need a pre-1987 bike, toe clips, downtube shifters and period cycling clothing is recommended. Many participants eagerly take up the spirit of the event and use metal water bottles, carry spare inner tubes crisscrossed around their body, use motor racing googles, and flat caps. If you ride with a moustache it's a bonus!!

Two years ago while on holiday in Tuscany I decided to go and visit the event to see for myself what the event was really like. I arrived on Saturday in Gaiole the day before the event and noticed immediately a very relaxing feel to the event and place. There were many stall holders selling original Campagnolo group sets, to 1969 L'Equipe magazines from the Tour de France to Molteni/Faema racing jerseys to metal drinking bottles with cork stoppers!! This was a real retro shopping paradise with something for everyone with an interest in the golden age of Italian Cycling. Then I bumped into my hero Francesco Moser who was a guest of the organisor, here he was still looking lean, tall and his trademark nose and chatting away with old fans.

The event on Sunday was fantastic to watch...every colour, every team, (Ti Raleigh to Salvarani) every bike from (Atala to Legnano) was on show from kids as young as 16 to those in the their 70's cycling through the Chianti region. The route has 4 distances which you can decide on the day the distance you wish to participate. 40km, 80km, 120km or 200km. At every 40km there are food stations....but these are not the usual nutritional stops of gels, sports drinks and bananas!! These stalls are filled with parma ham, salami, sandwiches of the local areas, local Tuscan soup Robolitto all washed down with Chianti!! At the finish everyone receives a bottle of Chianti and panforte which is a local Siennies fruit cake! After the weekend I was hooked on the whole event!

After talking about the event to friends over the next two years, we have finally decided that we would participate. Now the big challenge was to find a bike of the period to participate.

Gian and I headed for Tuscany to seek out bikes for L'Eroica, we talked to hoteliers, bike shops and even restauranteurs in our quest to seek out a L'Eroica bike and it became quite evident this was no easy search. Time and again bike shops were saying that the Italians over the years had thrown or given away their old bikes that now the one's that still exist are being kept as they realize, like old vintage cars, there is value in keeping them. A few find their way on occasion on ebay with prices now not quite cheap as one would have thought. 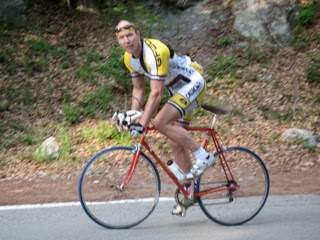 We met a hotelier owner called Enrico, and his father, located on Monte Amiato (an extinct volcano at 1700m). We had advised him of our interest in old bikes and he duly offered us the family's 2 Colnago's, one was a 1982 full Campagnolo Giuseppe Saronni replica bike (interestingly given as a gift by Ernesto Colnago himself as he was a regular guest of the hotelier). The bikes were in all of their original colour and components. I tried this bike (above) while Gian cycled a 1977 Colnago Sport Racer. Well!! We never had so much fun riding around Monte Amiato and the surrounding countryside. It felt like leaning to cycle again!!! The gear shifters made a tremendous thud, every time I changed down it reminded me so much of the exact sound when i used to ride similar bikes in the late 70's.

We were hooked and ready to buy but the owner had left for the day and we had to move on! Chance lost!!

We traveled back through the beautiful unspoilt rolling countryside of South Tuscany and came across a lovely countryside restaurant in which we were the only customers but the owner Gilardo made us most welcome. We had a range of antipasto with some fine local wine and after a short sleep under a tree we were off on another quest courtesy of our discussion with Gilardo who recommended that we see his friend Maurizio in Sinalungo. When we went to meet Maurizio he was busy working on restoring a 1910 touring bike for a client. Although his shop had the latest bikes, from Bottechia and Cannodale, here he was busy working with meticulous accuracy, to verifying against old photographs, that the completed 1910 bike was correct. At this very moment I received a phone call from my friend at L'Eroica who confirmed that he would be able to let us borrow L'Eroica eligible bikes. Our quest was finished.... for now. Seeing an artisan such as Maurizio work first hand was a fitting end of our quest to find a L'Eroica bike.


See you October 2nd in Gaiole!"

You can find Marco and GustoCycling on Facebook here.

Stories for the Italian Cycling Journal about rides, granfondos, touring, having a good time cycling in Italy, Italian cycling history, etc. are always welcome. Contact me at veronaman@gmail.com. There are more than 2,000 stories in this blog. The search feature to the right works best for finding subjects in the blog. There is also a translate button at the bottom so you can translate each page.
Posted by Angelo senza la o at 6:18 AM