A Visit to Dario Pegoretti Brent dropped in for a visit again so we planned to ride to Dario Pegoretti's (Dario was also winner of the "Framebuilder of the Year" award) workshop in Caldonazzo on Tuesday. However, we did a lot of riding over the weekend (220 km +) so we decided to take the train from Verona to Caldonazzo instead as it's a 200km bike ride with some climbing thrown in. Caldonazzo is very easy to reach by train via Trento or Bassano del Grappa. This would also enable us to spend more time with Dario.


The Trento to Caldonazzo train was ultra-modern with clever bike racks; it obvious that being an autonomous region has its fiscal advantages. The village of Caldonazzo is located on the shores of Lake Caldonazzo in the autonomous region of Trentino-Alto Adige. It's a beautiful setting as can be seen from this aerial photograph showing the village on the upper left. Each of us had visited Dario in the past so we were both looking forward to seeing him again. It's a 3 minute walk from the train station This is the first view you see of Dario's workshop There are no large signs, only these small logos in glass panes; if you are not a Pegoretti fan you probably wouldn't know what's going on inside "Jack" looks after security and approves of our visit Walking around inside you get a sense of this is where they really build Italian bikes, "fatto a mano" (handmade) One of the cool things about Dario is that he's really into bikes. In fact, there are all kinds of bikes all over the place. Some examples of the older ones that he's made (like the CCKMP), and others that are collectibles. I wonder what that orange bike is (above?)

It's a very old MASI, a "Speciale" model when they still used the Italian for Special (which came later). 1960s? 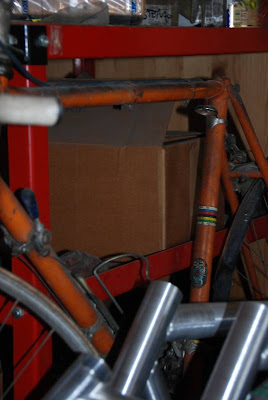 This Marcelo and BLE-Big Leg Emma (look at those chainstays!) were finished, And were destined to be packed We chatted with Dario, in Italian and English, for quite awhile. A nice lunch gave us the opportunity to solve all the problems of Italy (just kidding) and talk about bike building, and the long history of builders from Verona. Brent was able to discuss some ideas he had with Dario about a future order to be placed with GITA.

The workshop is very busy, orders are up. There have been some delays in getting all the Columbus tubesets Dario would like. The main thing is that Dario is looking and doing well, and he continues coming to Verona for monthly checks with his doctors.

Someday I'll be asking myself why I haven't purchased a Pegoretti while I'm here. The answer, in part, is because the dollar is at 1.58 to 1 Euro at the moment and I'm retired. As they say here, "Boh."

It's always a pleasure meeting with Dario but then the time comes when it's time to go, The train to Trento offered these last views of Lake Caldonazzo, and of Trento. If you are ever in the Veneto, Trentino or Alto Adige you should plan to visit Pegoretti. It's a "must see". Email or call in advance.