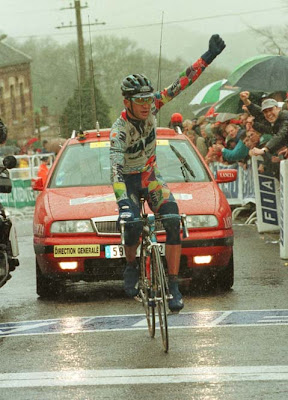 Michele Bartoli has signed an agreement with Prestigio (translates to Prestige) to create a line of "Michele Bartoli by Prestigio" bicycles. In August, Prestigio announced frames that were designed in collaboration with the Turin design company Giugiaro Design.

The Managing Director of Prestigio, Giancarlo di Marco said, "It will be a superbicicletta: elegant and fast, produced in Italy, and made to measure in order to meet the needs of our customers."

Michele Bartoli added, "I am convinced that we will do important work and the result will be classy. The frame will be called "Michele Bartoli by Prestigio" and will reflect the performance in a bike that I demand. I know the needs of cyclists very well and I think am am able to to provide useful information to translate that into a bike that is "prestigious"."

The following from "Great moments in Classics history – the Ardennes Classics" of www.cyclingnews.com:

The 1999 La Flèche Wallonne was held in tough conditions, with temperatures a chilly three degrees Celsius and rain complimented by snowfall. Michele Bartoli prevailed in those atrocious conditions but said that earlier in his career he would have ridden with less clothing, admitting that he had gotten a touch 'soft'.

Such toughness would never occur to Oscar Camenzind, who was wearing a vest until he figured it would be best to remove it for the finale. The only problem was Camenzind got his zipper stuck.

Bartoli and Maarten den Bakker waited for a while as Camenzind went to his car to get his clothing problem sorted out. Apparently scissors aren't part of the 'must have' toolbox in the team car.

Eventually Bartoli and Den Bakker couldn't wait any longer and reached the Mur de Huy together, without the Swiss dressman. Bartoli sprinted away on the steep climb, with pitches up to 25 percent, and won by a good dozen seconds.

After Camenzind's fixed his zipper problem, he continued by himself and almost held off the peloton behind. Only Mario Aerts was able to slip past the Swiss rider for third place.

Bartoli deserved the win as he was the strongest rider, having initiated the decisive three-man move on the second time up the Mur de Huy (out of three total ascents). Bartoli, Camenzind and Den Bakker worked well together and by the time Camenzind fell apart (or his clothing did, anyway) the gap was almost three minutes, some 50 kilometres from the finish.

By the end of the 1996 season Michele Bartoli had cemented his place as one of the best one day racers in the world. However during the first World Cup races of 1997, the Italian failed to claim the next big win his palmarès cried out for, with a crash-effected Milan-Sanremo finishing in a bunch sprint and Rolf Sørensen stealing the show in Flanders. The pressure on the MG-Technogym rider's shoulders was building.

All that changed on a sunny April day in Liège. The scene was perfect, with the conditions combing with one of the most illustrious start lists any Classic from the era could hope for – Johan Museeuw, Mauro Gianetti, Laurent Jalabert, Marco Pantani, Rolf Sørensen, Alex Zülle and Chris Boardman. The real action began with 50 kilometres remaining, as the peloton reached La Redoute, one of the race's most historic and often influential climbs, and Bartoli's henchmen began to gather at the front. What ensued was one of the finest displays of tactical racing the event had seen.

It was the sparked by the bespectacled Zülle, who launched the first serious dig. He was quickly followed by Bartoli and Pantani and Jalabert, as the World Champion Museeuw and Sørensen were forced onto the back foot.

Pantani – still recovering from his horrific crash – was dropped as the trio pushed the gap out to a minute. Bartoli, now sandwiched between the ONCE teammate, and top two riders in the world played his cards majestically, first chasing attacks and then countering the Frenchman.

It was this counter that did Zülle in, his confidence now shot, as Bartoli pushed again, to consign the Swiss rider to 41st place. With the final kilometre now in sight, Bartoli looked across at Jalabert, who by now was unable or unwilling to make eye contact. Bartoli saw his moment and swooped, leaving the world number one and crossing the line alone in Liège.

Bartoli went on to lead the Giro d'Italia that year, but his career will always be associated with that day and the panache he displayed in beating two of the biggest stars in cycling.

Stories for the Italian Cycling Journal about rides, granfondos, having a good time cycling in Italy, Italian cycling history, etc. are very welcome. Contact me at veronaman@gmail.com. There are more than 1,500 stories in this blog. The search feature to the right works best for finding subjects in the blog and there is also a translate button at the bottom so you can translate each page. What I'm riding.
Posted by Angelo senza la o at 7:17 AM