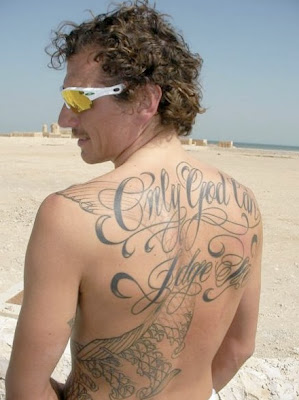 Regarded as a playboy of the international peloton, Italian teaam captain Pozzato claims he has not had sex since breaking up with his girlfriend in May.

"Staying away from women isn't a problem for me at the moment. For the world championships I'm willing to make that sacrifice and lots of others," Pozzato said before arriving in Victoria.

"The end of my relationship was a difficult time and at the Giro I was sleeping for just two or three hours. I was a wreck."

The ploy appears to have worked.

A stage winner at the grand tours of France, Spain and Italy, Pozzato delighted coach and dual world champion Paolo Bettini with a clinical ride.

The Italians are desperate to honour the memory of former national coach Franco Ballerini, who was killed in a car accident in February.

Bettini's squad traveled to Geelong in July for familiarization rides around the world title circuit.

"I was confident before this race because in the Vuelta (Tour of Spain), I was very strong," Pozzato.

"But it's important for the team to stick together, (to) do a race together without radio communication like we have to next week."

Gerrans, competing for the first time since abandoning the Tour of Spain, was satisfied with his 15th.

"I got exactly what I wanted to get out of it," he said.

"I kept putting myself up there with hard splits until that final climb.

"I stretched the legs and had a bit of a go."

Cancellara vindicated his decision to make a late entry into the race with a controlled fourth.

"It was the right choice to come here to this race," he said.

"I still have jetlag. For me, today was a long day. But I am happy."

Photo: Pozzato's tattoo, in case you hadn't seen it

Stories for the Italian Cycling Journal about rides, granfondos, having a good time cycling in Italy, Italian cycling history, etc. are very welcome. Contact me at veronaman@gmail.com. There are more than 1,500 stories in this blog. The search feature to the right works best for finding subjects in the blog and there is also a translate button at the bottom so you can translate each page. What I'm riding.
Posted by Angelo senza la o at 4:03 PM

Email ThisBlogThis!Share to TwitterShare to FacebookShare to Pinterest
Labels: Pozzato