Guest contributor Rich, who was on a tour with CycleItalia, sends in his last story about the Legendary Climbs Tour.

I was riding the last 4 kilometers of the Passo Pordoi alongside an Italian cyclist from Rome. We had gotten acquainted using his limited English and my almost nonexistent Italian. We were both riding well below our maximum effort and enjoying the incredible weather (sunny and about 70 degrees) and the spectacular views on what might be the prettiest pass there is. My companion looked around at the scene and uttered that single word that summed up a moment I will remember for a long time. That same word, ‘bella’, is also the single word that best describes my entire Italian experience.

Our tour group reached the start of the Passo Pordoi as the second climb on another four passo day. We had already been up the easy and scenic Passo Campolongo just outside of our hotel in Covara, and after a very quick descent we regrouped in Varda to begin the 10 km climb up the Pordoi.

Compared to many of the other climbs we would encounter in Italy, the Pordoi is not exceptionally difficult, even though it is longer and steeper than either side of our local favorite Ebbets Pass. But what makes the Pordoi stand out is how beautiful the climb is. The road curves back and forth on an open grassy field, with stunning views of the high mountains to either side. I could see down to the village where we started the climb, seemingly impossibly far below. Did I really get this high this fast? And when I looked up the road I could see the roof of one of the refugios at the summit, clearly showing me that I would be on the climb for quite a while yet. But that was fine. This climb is so scenic and relatively easy, by Dolomite standards anyway, that unless one is racing up it, there really is no hurry. This is a climb that deserves to be savored, and my new friend and I were doing just that. 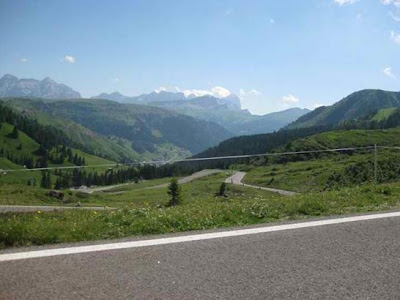 The picture above shows the road and the valley where we started far below, and the next photo shows the uphill view to the saddle at the summit. 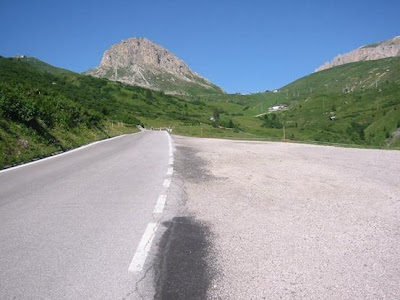 As we neared the top, my Italian friend told me to be sure to see the ‘Simoni monument’, which was actually a plaque with a list of all the Giro riders who had won the Cima Coppi on the Pordoi in the years when it was the highest point of the race. And of course, every cyclist coming here has to have a photo at the Coppi Memorial. The designers of this tribute have done the Il Campionissimo proud. The sculpture is profound and the backdrop beyond magnificent. At times groups of cyclists have to wait in line for their turn to get their photo at the monument, but despite the beautiful day and large number of cyclists milling around the summit, there was a lull that our group took advantage of, and everyone handed their camera to Heather who took pictures with each one. Mine photo is below. From left to right: Dave and Jacki (Pleasant Hill CA), our guide and host Larry, Jack (Walnut Creek), Rich and John (upstate New York).I suppose our newlyweds did not get the memo to wear the official CycleItalia jersey for this dramatic photo op. 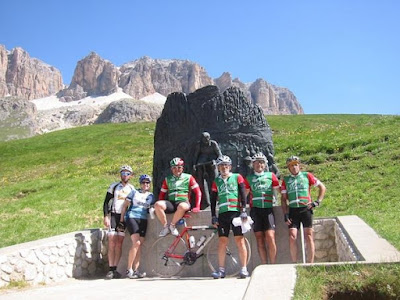 The close up view of the monument is worth a look too. The tifosi and their Campionissimo. 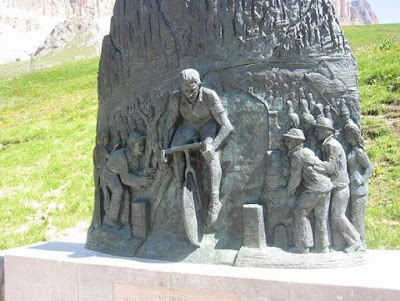 The rest of the day was a little less exciting. We climbed the Costlunga, and while I can’t remember a single thing about that climb I do remember the excellent pizza lunch I enjoyed at the top. This was followed by a long (18 km!) fast downhill which included a tunnel and then, what looked on the profile like a relatively minor climb up to Nova Ponente and Monte San Pietro. The climb turned out to be not so minor. Three of our group decided to sag this one, including John, who had been here before. I think he knew something, as this climb turned out to be longer and steeper than expected, and it wasn’t very scenic either. Only Jack and I took it on, and he disappeared up the road leaving me on my own. This climb resembles doing the Three Bears out of Lafayette for around 10 miles, with long straight grinds and nary a switchback in sight. We were at a lower elevation of only 1200 meters, and for the first time on the trip I was hot. And pretty tired. But Larry and the van were waiting for me at the false summit (the others had remounted their bikes to do the last 1 uphill km and the fantastic 10 km descent to our hotel), and I got some cool water and finished the climb feeling drained of energy but still glad I did the whole thing. The scenery near the top improves, and there are views of hay fields and cows and of the mountains on the other side of the wide valley at the bottom of our drop to the hotel.

But the rather ordinary end to the day did nothing to diminish the pure joy of having been at the top of the Pordoi, a passo that has seen many Giro’s cross over its summit and many champions excel there with tremendous efforts of determination and ability. There is no feeling like riding to the top of a Passo like this, a spot beautiful on its own merits, but made even more magnificent by the history of the great bicycle racers who have triumphed and suffered on its slopes. I’ll never forget being next to Coppi’s monument and the joy I felt in that moment. And there were multiple moments like this on CycleItalia’s Legendary Climbs Tour.

Email ThisBlogThis!Share to TwitterShare to FacebookShare to Pinterest
Labels: Pordoi