We previously had photos and information here from the evening in which the Bianchi Oltre XR "Gimondi 70" was unveiled. Today we received the official information about the limited edition of 70 units as follows: 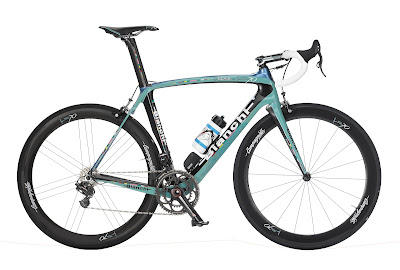 "Bianchi has developed a Special Edition Oltre XR model in celebration of Felice Gimondi's 70th Birthday. Only 70 units of this unique and exclusive Gimondi 70 bicycle will be produced; click on photo to enlarge.

The 70 numbered units will be built and customized at Bianchi headquarter in Treviglio (Italy).

Attributes:
- Celeste Bianchi color which matches up the blue of the Bianchi jersey worn by Felice Gimondi in the 60's and the blue of the Sapphire, the amulet stone distinguishing the people born in September.
-Multicolour stripes along the tubes to remind us of Gimondi's leader jerseys of Giro d'Italia, Tour de France, Vuelta a Espana, World and Italian Championships.
-the names of Gimondi's main victories on the down-tube, inside the Bianchi eagle graphic
-Gimondi 70 logo on the headtube
-Vintage Bianchi logo used in the late 60's/early 70's 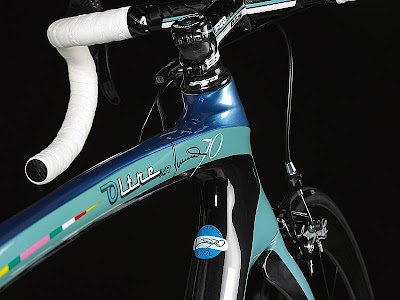 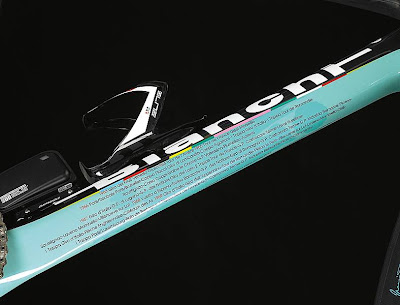 With Campagnolo Super Record groupset EPS electronic, the bike is characterized by four customized components with the "Gimondi 70 logo":

There will also be prepared a list of customized items (accessories) to include in the sales of the Gimondi 70 limited edition bike.

Pricing and further information will be forthcoming."

Contact me at veronaman@gmail.com. There are more than 2,600 stories in this blog. The search feature to the right works best for finding subjects in the blog. There is also a translate button at the bottom so you can translate each page.
Posted by Angelo senza la o at 1:10 PM