A Giovanni Pinarello Story: "One Good Frame...Deserves Another"

Re-visiting a story we published in 2010, Kimberly B. writes about her cycling trip with Eros Poli and meeting Giovanni Pinarello:

One Good Frame...Deserves Another
Meeting the Inspirational Giovanni Pinarello

This summer I had the good fortune of chasing down my dream of climbing Mount Ventoux (on my bicycle). I signed up for a trip with Eros Poli, recommended by my friends. I had heard so many inspirational things about Eros Poli – the least of which was that he won the Mt. Ventoux stage in the Tour de France in 1994. Two friends from my cycling group, The Bedminster Flyers also signed up for the trip. We were excited to experience the epic climbs Telegraph, Galibier, Glandon and of course Ventoux. So, I signed up, with two goals in mind, one to make it up Mount Ventoux and the second, to come home with a story for the Italian Cycling Journal. 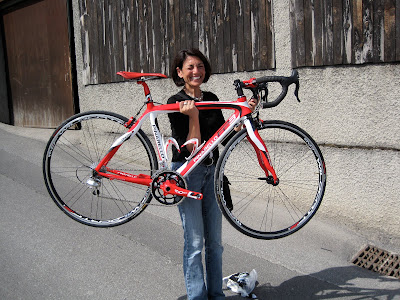 Our trip began with getting our bikes. Did I mention we were riding brand new Pinarellos? I rode a beautiful red Prince – a complete carbon fiber frame with Campagnolo components. I had always loved Pinarello frames and owned a Pinarello steel Stelvio that I used when racing. But this bike was something different and I was quite sure that the bike would make up for my lack of training and of course – my age (La Gallina Vecchia)! My friends tried to reassure me by reminding me of the famous Italian saying, “La Gallina Vecchia fa buon brodo (The old hen makes the best broth).”

As the trip started I remembered the story of my first Pinarello bike – the beautiful blue Stelvio frame which I still own. When I was racing I had always wanted a Pinarello frame but could not afford it. Then, a strange series of events took place. I was in a small fender bender and the driver who hit me decided to pay the expenses for my car out of pocket – to the tune of $1,200.00. This was the exact amount I needed for the Pinarello Stelvio frame I had always wanted. So, I did what any good cyclist would do... I drove directly to the bike shop, handed over the money and placed the order for the gorgeous frame. I was fortunate enough that the mechanic at the shop offered to build the bike for me with used parts from his old racing bike so that the rest of the bike wouldn’t cost so much. I was thrilled, and it made driving around with a dent in my station wagon that much less difficult. 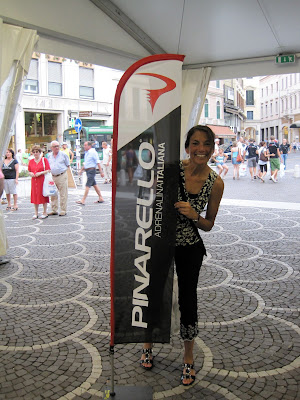 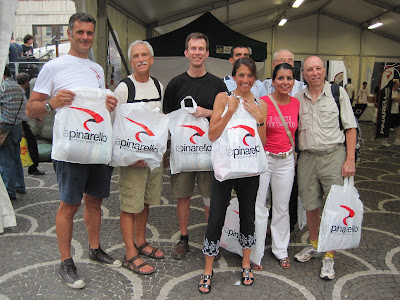 I shared my story with my friends on the tour and it made riding the Pinarello Prince that much more meaningful. In addition, we were ending our trip with Pinarello Granfondo Cycling Marathon which started in Treviso, Italy. Eros Poli was sponsored by Pinarello as a racer and knew the family well. He brought us to their beautiful shop in Treviso where we met Giovanni Pinarello himself! I was in awe! I couldn’t believe I had the chance to meet him and his family too. Mr. Pinarello was very gracious, kind, humble, and generous – it was an honor to meet him. 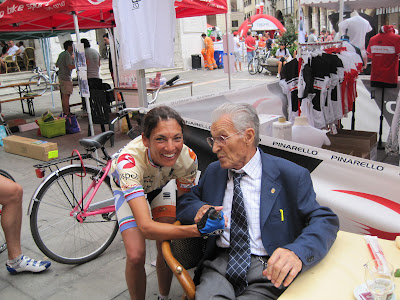 Later, after the marathon was over, we saw Giovanni Pinarello again. I was eager to have a picture of him to keep along with the other Pinarello stories that seemed to weave themselves into my life. Eros saw Giovanni sitting with a friend and asked him if I could take my picture with him. He agreed. I had just finished the marathon and was covered with mud, sweat, energy drink, and probably lots of biscotti crumbs too – but didn’t want to miss my chance. I walked over with my Pinarello Prince and then Giovanni looked at Eros and said “She has a beautiful frame!” Eros, pointed to my bike and said, “Oh Yes, the bike!” and Giovanni said, “No, Her!” From then on, “The Frame” became my new nickname.

So there it is, my Italian Cycling Journal story. I felt so blessed to meet Gioavanni Pinarello – especially given the way I felt about that steel Stelvio frame. I also felt so privileged to ride up Mount Ventoux with the encouragement and inspiration of Eros Poli, a world champion, gold medalist and Tour de France stage winner. The miracles within the whole trip still astound me! And honestly, I don’t mind saying that being called a “beautiful frame” by a man with an eye for designing revolutionary racing frames made the broth that much better!

Wishing you great climbing, a chance to ride a Pinarello frame, and the chance to be with inspirational cycling heroes from all over the world!

P.S. I recently found out that Valentino Rossi – the famous Italian motorcycle racer also referred to himself as La Gallina Vecchia, which made me feel a bit better too! And, I did make it to the summit of Mont Ventoux (Eros and I): 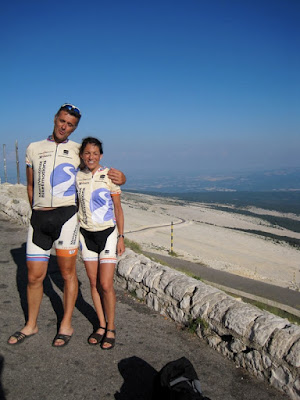 Content for the Italian Cycling Journal is now based upon contributions from readers. Please contribute. Stories about rides, granfondos, touring, having a good time cycling in Italy, Italian cycling history, racing, etc. are always welcome. Contact me at veronaman@gmail.com.
Posted by Angelo senza la o at 7:30 AM