The Netherlands’ Province of Gelderland, will host the Giro d’Italia 2016 start, from 6 to 29 May, organized by RCS Sport / La Gazzetta dello Sport. The 99th edition of the Corsa Rosa will start for the 12th time from outside the Italian borders, it will be the third time from the land of tulips and windmills, following Groeningen in 2002 and Amsterdam in 2010.

START ON FRIDAY 6 MAY
Thanks to the concession of the Union Cycliste Internationale to allow the long transfer from the Netherlands, the Giro will have an extra rest day on Monday 9 May, when the Carovana Rosa will return to Italy straight to the southern part of the country. The stages:

Stage 1, Friday 6 May – The first stage, an 8.1km Individual Time Trial, will go through Apeldoorn, finishing in the city.
Stage 2, Saturday 7 May – 180km stage for the fastest wheels in the peloton, starting from Arnhem and finishing in Nijmegen.
Stage 3, Sunday 8 May – The third stage, which is expected to be a bunch sprint, will start from Nijmegen and end in Arnhem after 190km.
Rest Day, Monday 9 May – Rest day and transfer to Italy. 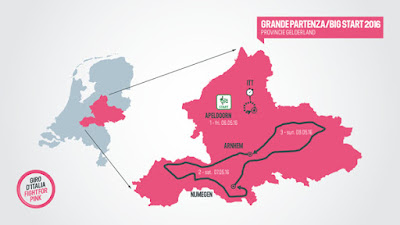