Were you impressed with the Colle Delle Finestre in this year's 20th stage of the Giro d'Italia? A major new event for Gran Fondo enthusiasts has been announced that will take place on 2 August: the first gran fondo “La Marmotta - Sestriere - Colle Delle Finestre“, organised by SSD RCS Active Team a r.l.

There are two routes, both starting at Cesana Torinese and finishing at Sestriere, and both crossing the mythical Colle delle Finestre, the highest point of the 2015 Giro d’Italia. 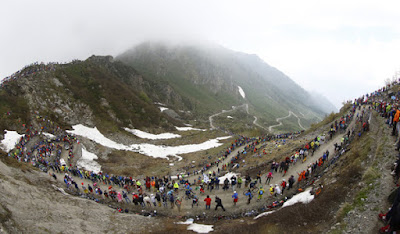 "The toughest inclines are faced in the first 1,500m of climbing. It's a very nice climb. The descent is not that difficult though. There are three bends in which you need to put more attention, first one to the left after 500m from the top."

"To face a climb like this at the Giro I was using 39 x 29 as the easiest gear ration. But I'm a professional rider and for us, easy to say, it's different. I think that an expert sportive rider could use a 34 in front, while a less expert rider should consider using 32."

"Anyone who rides with tubulars should think about using an anti-puncture liquid. The tire pressures should be half a bar less than usual both on front and back wheels. You need to adapt pedaling style too. If you're not used to riding a mountain bike it's better to choose the cleaner lines."

Content for the Italian Cycling Journal is now based upon contributions from readers. Please contribute. Stories about rides, granfondos, touring, having a good time cycling in Italy, Italian cycling history, racing, etc. are always welcome. Contact me at veronaman@gmail.com.
Posted by Angelo senza la o at 3:35 PM