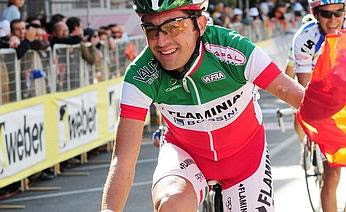 Filippo Simeoni, the 37 year-old current Italian national road race champion, today turned in his tricolor jersey to the Federazione Ciclistica Italiana to protest his and his team's non-selection to the Centenario del Giro d'Italia.

"It is unacceptable that the Italian national champion cannot participate in the most important cycling event of his country. The organizer should explain to all fans why national values are not respected, why team selection criteria is not clear, and why commercial interests take precedence over sporting interests."

Simeoni also insinuated that the behind the non-selection was the old controversy involving Lance Armstrong; Armstrong will be racing in the Giro for the first time this year. The old controversy goes back to 2004, Stage 18 - July 23: Annemasse - Lons le Saunier, in the Tour de France. Here is what happened as reported by AFP:

"Lance Armstrong displayed his well-known determined side, but in bizarre fashion today after chasing down an early attack by Italian Filippo Simeoni on the 18th stage of the Tour de France.
The 32-year-old US Postal leader finished the stage with the main peloton at 11mins behind a group of six riders from which Spaniard Juan Miguel Mercado had emerged to sprint home ahead of Vicente Garcia-Acosta and win the stage for his Quick Step team.

Armstrong, who has also won four stages on this year's race, retained his 4min 09sec lead on second placed Italian Ivan Basso, of CSC, and is well on his way to a record sixth yellow jersey.
But despite his total domination, Armstrong also showed his unforgiving side, especially with Simeoni.

The 32-year-old Italian is a key witness in the trial of Italian sports doctor Michele Ferrari, with whom Armstrong has admitted collaboration in the past, and earlier in the race confirmed his intention to take Armstrong to court for defamation.
Simeoni wants to sue the five-time winner over comments made in French newspaper Le Monde in July 2003. The article quoted Armstrong as saying that Simeoni had ''lied'' when he gave evidence to investigators saying was Ferrari who had showed him (Simeoni) how to use the banned blood booster EPO (erythropoietin) effectively.

The comments did little to improve Armstrong's image vis-a-vis Ferrari, who in the cycling world is looked at with suspicion as much as with curious admiration for his knowledge of advanced training methods.

Today the Domina Vacanze team rider's attempts to get into the six-man breakaway were kept immediately in check, as though Armstrong was intent on trailing him wherever he went even though Simeoni is not a threat in the general classification.

And the message from Armstrong seemed clear: 'Me and the peloton don't like what you've said about Ferrari, and we won't let you forget it'.

Race leaders rarely need to chase down such attacks, and although stranger things have happened in cycling it still shed Armstrong in a curious light.

Simeoni, for one, wasn't happy: ''Armstrong today showed everyone the kind of champion he is,'' said the Italian, who has never implicated Armstrong in any evidence he has given about Ferrari.

''If he was truly a big champion, he wouldn't have to preoccupy himself with modest riders like me.''

When questioned, Armstrong later insisted: ''I was protecting the interests of the peloton. The other riders were very thankful,'' he said before hinting at his real motives.

''All he (Simeoni) wants to do is destroy cycling, destroy the sport that pays him.

''I can't say how many riders said thank you very much.

''They understand that it is their job, and they don't want somebody from within destroy it,''
added Armstrong, who took his petulance a stage further by poking fun at the journalist from L'Equipe newspaper who had interviewed Simeoni two weeks ago.

But despite Simeoni's outcry, Australian veteran Scott Sunderland believes Armstrong's behaviour wasn't out of the ordinary.

''That sort of stuff does happen, and it has for years. I remember a lot of rivalries between teams in the past,'' Sunderland said.


The 37-year-old Alessio rider admitted that Simeoni's card had been marked by some in the peloton, and that Armstrong was within his rights.

''Filippo Simeoni spoke out and from what I can gather was throwing accusations around, saying things like you can't win anything on the big Tours if you're not taking stuff (drugs), so I think a lot of guys have just taken offence.

''It was stupid for Simeoni to do that, especially if he's still in the peloton and riding the big races.
''Plus, he's (Simeoni) talking about what happened in 1996 when things were a bit out of control. Since then things have really moved on as far as fighting against doping is concerned,'' added Sunderland.

''As far as Lance is concerned, I think he was on an easy day and he wanted to show Simeoni that if he was going to attack he would find it difficult.

Ferrari, who once claimed that EPO was no more harmful than orange juice, is set to go on trial in Italy for sports fraud and the distribution of banned substances.

The fallout from the trial, scheduled for later this year, could raise further questions about Armstrong's links with the Italian doctor. "

Reading this reminded me, regretfully, that not much has changed when it comes to doping.