Team Sky Extends with Pinarello Through 2013 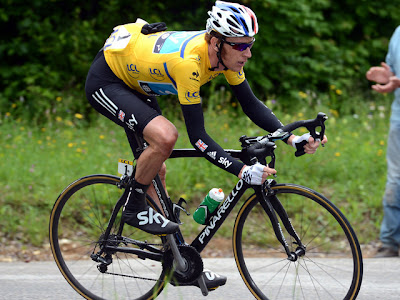 The L'Equipe story that Team Sky was dropping Pinarello in favor of Specialized is not coming true, at least not until 2014. Team Sky will ride Pinarello bikes next season after agreeing to extend their current sponsorship until the end of 2013.

After the story broke, Luciano Fusar Poli, Managing Director for Pinarello, responded to the L'Equipe story saying, "We have a three year contract which ends at the end of 2012 so we’re still the sponsor and the bike supplier. Negotiations are going very well and we have a good relationship with the team and we’re hopeful. There’s no problem, so far. Team Sky is the best team in the peloton at the moment, not only for performance but for the image and the way they’re running the team so many of the big companies could be interested. We’ve had a three-year relationship with the team and the British Cycling Federation, and they’ve been three fantastic years. We’ve developed a lot of products with them and we’ve improved our knowledge and given them good products to ride. I think negotiations will be concluded very soon. Legally nothing can be announced soon but we’re negotiating and in a good position."

A founding partner of the team from its inaugural season in 2010, Pinarello has provided Team Sky with winning equipment from the outset, including this year’s hugely successful Dogma 2 road race and Graal time trial bikes.

The highly-respected company has worked closely with riders and performance staff at Team Sky to develop the team’s bikes - a partnership which to date has yielded 85 victories in 18 countries.

Heading into the Tour de France as the number one ranked team in the world, with a potential winner in Bradley Wiggins as well as World Road Race Champion Mark Cavendish, Team Sky has shown a clear progression during each of its three seasons to date.

Team Sky’s Head of Operations Carsten Jeppesen said: “Team Sky are really happy to have Pinarello as a partner and look forward to building upon what is already a really strong working relationship.

“From a performance perspective we have come a long way in the three years we have been working with Pinarello to date. Their dedication to performance and servicing the team really sets them apart.

“Together we have developed a number of new models which have performed at the highest level and we aim to continue that trend. We already have some exciting plans for next year on the development front. As a team we are always looking to improve and with Pinarello we have the best possible opportunity to do that.”

President of Cicli Pinarello Fausto Pinarello agreed, adding: “Working with Team Sky has been hugely rewarding for Pinarello in the last three years and we are delighted that the team will again use our bikes during the 2013 season.

“Pinarello and Team Sky have worked closely together to develop our bikes and we’re proud to have played a part in Team Sky becoming the best team in the world. 2012 has been a great season so far but there is so much more to come in the near and long-term future.

“We’re already working hard to ensure Team Sky will again have the best bikes in the peloton in 2013.”

Team Sky will use the Dogma 2 road race bike and the Graal time trial machine at this year’s Tour de France.