It 's 1922 when Alfredo Forcesi establishes Gloria on Viale Abruzzi, 42 in Milan. He doesn't know it yet but soon the factory will be the source of the biggest talents of Italian cycling, such as Faliero Masi and Ernesto Colnago who begin to work at Gloria in the 1930s.

The racing history of Gloria starts well: after only one year of production Gloria can already boast their own bands of iridescent colors based upon the world championship victory in 1923 by Libero Ferrario. In 1931, Francesco Camusso brings the Milanese brand yet more headlines by winning the Giro d'Italia. Following this Gloria will have other champions such as Costante Giradengo and Learco Guerra. 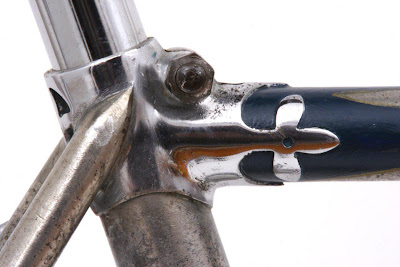 Until the end of World War II Gloria is considered one of the best known brands in Italian cycling. Since the 1920s Gloria bicycles are recognized by the highest level of finish and their particular lugs. These are details that Colnago and other artisans will begin to employ beginning in the 1950s. The pride of the company is the "Garibaldina" model, considered one of the finest bicycles in the world. The frame is satin nickel and the lugs represent a flower with three leaves. Photos courtesy of www.thevintagebikelife.com, click here for additional photos. 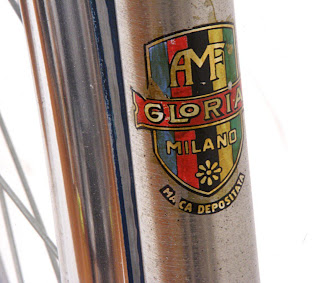 One version of the Gloria logo consists of the letters AMF (Alfredo Forcesi Milan) , the colors of the rainbow (thanks to the world championship won), Gloria the brand, and Milan were the bicycles were produced.


My thanks to the Associazione Velocipedisti Eroici Romagnoli (AVER) which has kindly agreed to a mutual exchange of content with the Italian Cycling Journal. AVER is dedicated to lovers of the "heroic" age of cycling.

There are more than 2,600 stories in this blog. The search feature to the right works best for finding subjects in the blog. There is also a translate button at the bottom so you can translate each page.
Posted by Angelo senza la o at 5:41 AM

Email ThisBlogThis!Share to TwitterShare to FacebookShare to Pinterest
Labels: Gloria