"The Accidental Death of a Cyclist", Marco Pantani

"The Accidental Death of a Cyclist", a documentary about Marco Pantani, is to be released before the Tour de France. It is slated for U.K. theatrical release in May.

James Erskine, the award-winning writer, director and producer, said, "This is not just a film about cycling, but a psychological exploration of what drives athletes to compete; the masochistic pursuit of victory, to the point of self-destruction. It will look in detail at the nature of what it means to be a sporting champion and what great victories mean, in the controversial context of the doping allegations that continue to plague the sport."

The film will use race archive and contemporary news footage, stylized dramatic reconstructions and interviews with Pantani's friends, family, colleagues, and rivals.

RAI broadcast a movie in 2007 about the life of Marco Pantani. Actor Rolando Ravello played Pantani who died of a cocaine overdose in 2004. Ravello trained for months on the bike to prepare for the role; on set: 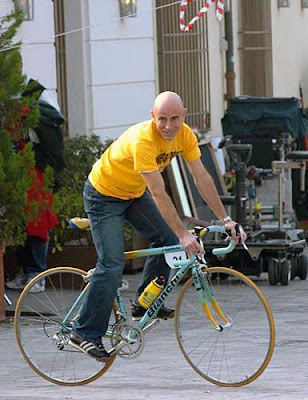 
Stories for the Italian Cycling Journal about rides, granfondos, touring, having a good time cycling in Italy, Italian cycling history, racing, etc. are always welcome. Contact me at veronaman@gmail.com.  There are now more than 2,700 stories in this blog. The search feature to the right works best for finding subjects in the blog. There is also a translate button at the bottom so you can translate each page.