A Visit to GRANDIS 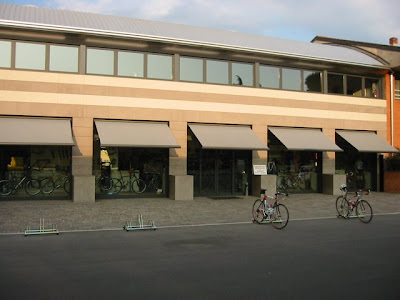 An American recently wrote to me inquiring if it would be possible for me to obtain more information about a 1970s/1980s Grandis frame he acquired. Many years ago Grandis bikes were exported, in small numbers, to the United States (Branford Bike was an importer). It happens that I am friends with one of the granddaughters of Silvino Grandis, the founder, so it was with pleasure that I rode to their new facility on the outskirts of Verona to see what I could learn.

The Grandis of today is a very impressive operation. In the last few years they have moved from the center of Verona to their larger facility where all aspects of their business are integrated in one location. Everything from design, sales, manufacturing, painting, assembly, and repairs take place here. Most road bikes they make are built to a customer's specification. Not only in fit but also tube and materials selection based on the goals of the rider. I have seen many very interesting bikes with mixes of materials (steel and carbon for example), and mixing of tubesets of the same materials. The two sons that run the business today, Ezio and Mario, are extremely knowledgeable and they are so busy that they haven't been inspired to export. It's a shame as there are some very brilliant bikes being made here in Verona.

In 1930, Silvino Grandis built his first bicycle but it wasn't until 1965 that the first Grandis branded frame appeared. In the years preceeding 1965 he gained a wealth of experience. In 1957 as the official mechanic of the "Venice A" team, he saw the triumph of "his" athlete Mino Bariviera at Milan-San Pellegrino (ex Italia Tour amateurs). Teofilo Sanson, who was well aware of Silvino's professionalism, also engaged him as the official mechanic of Gianni Motta of Sanson.

By 1986, the original shop space on Via Col. Fincato in Verona was no longer sufficient to handle the numerous customers so a new location was opened nearby in Viale Venezia 79. In 2004 they moved to their "Grandis Centre" at Via Strada della Giara n°11 (which is actually in Poiano).

When I arrived Mario Grandis was very gracious in looking through the photographs I had received about the vintage Grandis. He disappeared into his office and came out 10 minutes later with this information:

-color is called "fuscia pastello"
-circa 1980, Grandis Speciale
-frame Columbus SL; the fork is also Columbus
-it was made to measure for a customer at the time
-all the lugs are microfusion type made by Grandis
-the brake and chainstay bridges are reinforced; the brake bridge is curved so its lower on the chainstays to give more strength between them (the lower the better he explained)
-there are reinforcements in the seattube and downtube in the area of the bottom bracket in order to make the frame stiffer in that area.

The "economic miracle" of Italy post World War II has been based on small, family run businesses. Grandis is a good example of this. It's always a pleasure to visit them.

Photos: Silvino Grandis; Mario Grandis with photo of the 1980 fuscia Grandis that was the purpose of my visit; a Coppi/Bartali poster hangs in the store signed by Bartali with greetings to Silvino Grandis; a modern carbon Grandis (note: integrated seatpost, Zipp cranks, Zero Gravity brakes), the "Grandis Centre".
Posted by Angelo senza la o at 12:21 PM