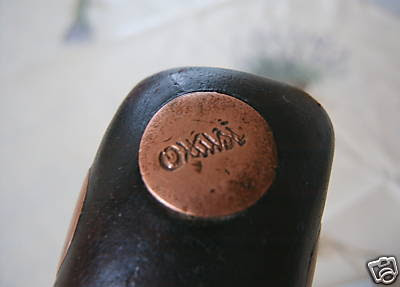 There was a gentleman by the name of Giuseppe Ottusi in Milan, considered "the master" in saddle modifications. He would purchase saddles, such as a Brooks saddle, and modify them. This work would would often be carried out for professional riders. The modifications would include shaping the saddle, making it softer, making it more breathable, and changing the height of the saddle (to rails). The costs of the modifications typically exceeded the cost of the saddle. Ottusi modified saddles have his name stamped in one or two rivets. While Ottusi was considered "the" master in Milan, the last of these craftsman was Giorgio Siligardi of Vignola.

They are relatively rare and are sought out by collectors for their bicycle restoration projects.

If anyone has more information about either of these saddles please leave a comment.
Photos: top photo is frfom a saddle sold on ebay in the Netherlands in 2009
Posted by Angelo senza la o at 1:42 PM

Email ThisBlogThis!Share to TwitterShare to FacebookShare to Pinterest
Labels: Ottusi