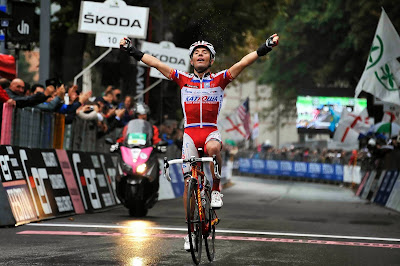 José Joaquín Rodríguez won his second Il Lombardia in as many years this afternoon, thanks to a brilliant solo attack on the Villa Vergano climb. It was a carbon copy of his 2012 win, also in the rain, and brought the Spaniard both revenge for last week’s second place in the World Championships, and provisional World Number One status, with just one more World Tour race left in the 2013 calendar. 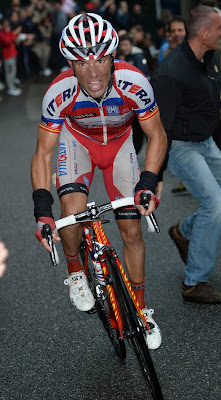 After the race, Rodríguez spoke to the press:

On victory: “It was a good win for me, in a beautiful race. I’m just enjoying the moment. I always try to look forward. This week hasn’t been easy because the World Championships are World Championships. But I have family and friends who helped me focus on this race, and I’ve come out of it the winner. It was important to prove to myself that I could recover well after World Championships and focus on the next race. This win helps me move towards 2014 knowing that this is my level.”

On Thomas Voeckler’s early solo attack: “I thought he’d make it. It was a good attack.. Trying to make up 3 minutes on Voeckler is difficult. He’s a very dangerous rider when he attacks alone, and he’s done this many times. But my team was exceptional, We set the pace at the front of the bunch and reeled him in.”

On the attack on the Villa Vergano climb: “I knew that if I wanted to win, I had to attack there. It’s October, the race is 240 km long, it was raining and cold, and it was even faster than last year, and you could feel the group was tired. I knew I had to make one decisive attack. I attacked at the right moment although, on the descent, I never trusted the curves in the rain, so the final descent was stressful. It is great to win, and it’s never easy.’

On his 10 second lead, reminiscent of the World Championships a week ago: “That did occur to me. I thought they might catch me. And my radio didn’t work until the final 2km. With those hairpins, you can’t see anything, and you don’t know what is coming, but thankfully nothing went wrong.”

On riding the 2014 Giro: “For me, the Giro is the most beautiful of the three Grand Tours. I always have good form after the classics. Last year I rode well at the Giro, and I think I can do well there again. This week I have felt a great deal of support from Italian cycling fans, and I think they deserve to see me start the Giro in 2014.”