Unraveling the Mystery of the Colnago "Clubs" 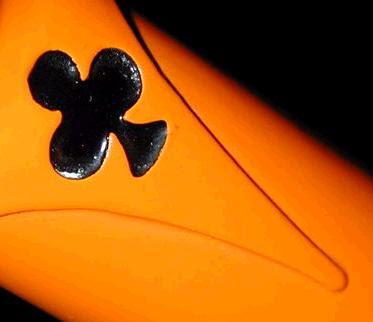 There was recently a discussion on http://www.classicrendezvous.com/ that began with this statement:

"The Dancelli bikes are named for Michelli Dancelli, a professional racer from the late '60's and early '70's. He rode for the Salvarini and Molteni teams. At Molteni he was a road captain for Eddy Merckx. His most famous win was the Milan-San Remo while at Molteni. At the time the team was riding bikes made by Colnago. The Dancelli family crest had a clover leaf on it, before Dancelli's win in the Milan-San Remo Colnago did not have a "brand", in honour of Dancelli's win at San Remo Ernesto Colnago adopted the clover leaf to represent Colnago and that is still used to this day."

However, from two important books about Ernesto Colnago we discover that the Dancelli family crest had nothing to do with the origination of the clubs (or clover leaf as it is also referred to).

First, we have this explanation from the book COLNAGO by Sergio Meda (this book was published in 1986 in limited numbers and was not for sale):

"For the present trademark, the ace of clubs, we must wait till 1970 when Michele Dancelli won the Milan-Sanremo on a Colnago, ending a 17 year famine that had lasted until Loretto Petrucci's double. The ace of clubs (trans: known as the ace of flowers in Italian) was an idea that came to Colnago, a man easily moved, by momentous occasions, the next day while reading the Gazzetta dello Sport. Bruno Raschi had produced one of his usual imaginative pieces, simple but effective. It revolved around Sanremo "city of flowers", and the picture of a cavalcade through two continuous streams of people packed together to cheer the long awaited Italian victory. Raschi wrote of a bicycle in full bloom surmounted by Dancelli, effortless, light as a feather. So Colnago created the flower with just a C in the centre, the one that still appears today...."

Second, we have this account The account (by Sergio Meda) from the autobiography "Colnago, The Bicycle", 2007 by Pier Augusto Stogi:

"Colnago: "The ace of spades had arrived. "Why the Ace of Spades"?. The idea came from Bruno Raschi, who wrote that Dancelli had won on a bicycle that was in bloom. That evening (1970) I met him in a restaurant in Laigueglia and the great journalist asked me: "Ernesto, why don't you make a symbol of the victory"? I liked the idea right away. San Remo, city of flowers, and Reschi had written that the bicycle was in bloom, and I was hoping in my heart that I would become the an ace in the world of bicycles. As soon as I got home, I made a new logo - the Ace of Spades. Today that logo is recognized all over the world." (ed. note : the writer that provided this to me added: The english version of the book uses the word "spades" although I believe that it was a translation error)

Further, a well known collector wrote to me saying, "Ernesto Colnago has stated that the inspiration for changing his logo to the Ace of Clubs was the result of Michele Dancelli winning the'70 Milano-San Remo for Molteni while riding a Colnago. "LaPrimavera" (the Spring) is the nickname for Milan-San Remo and the Ace of Clubs represents the spring flowers.

Steven Maasland (ed. note: a well known collector that is also bilingual in English/Italian) previously elaborated about the club/flower tie in: "The 'asso di fiore' is correctly translated as 'ace of clubs', however there is also a double entendre in Italian that is lost here as 'Fiore' is also 'flower', the symbol of the San Remo area. After the San Remo race win, Colnago spoke to the very well-known Italian sports reporter, Bruno Raschi, who was preparing his race report. He came up with the saying that the 'in fiore' bike won the race.This was a play on the fact that the race known for the 'riviera deifiori' (flower coast) as well as 'in fiore' (flowering or blooming). That particular race win was very important for Italian cycling because it was the first San Remo race won by an Italian in many years, hence the 'flowering' part in the 'flower' race."
Posted by Angelo senza la o at 11:41 AM