This article was written by Clayton Hirst and is used with is permission. It appeared in The Independent. 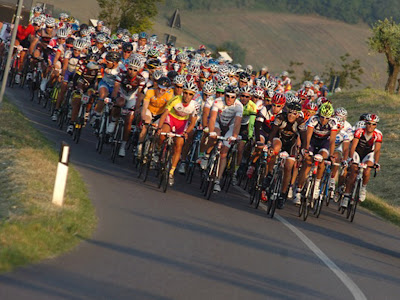 "It is 0550 in the morning and I am standing in a crowd of 11,000 people in a small seaside town on the Italian Adriatic coast. The smell of embrocation fluid, rubbed into tanned shaven legs to warm up the muscles on this cold morning, wafts in the air.

All around me there is the sound of the rapid-fire chatter of predominantly Italian men nervously discussing the day ahead, competing with a loud PA system and a helicopter hovering above.

And as the sun begins to rise at this early hour, I am surrounded by garish blur of lycra covered in logos from a range of local sponsors.

We are in Cesenatico at the start line for the 43rd edition of the Nove Colli. This is a tough and historic 200 km bike race over nine big climbs in the Emilia Romagna region of the country. This is my first taste of what the Italians call a ‘gran fondo’, a challenging mass-participation race that attracts a mix of amateurs, semi-pro riders and a small number of wide-eyed foreign riders like myself.

First raced in 1970 and famously ridden by the late Italian cycling legend Marco Pantani, the Nove Colli is regarded as a the mother of gran fondos, in a country where cycling almost rivals football as the nation’s favourite sport. “For the professional rider of gran fondos, the 200 km Nove Colli is as hard as an Alpine stage of the Giro de Italia,” says Luca Gialanella, Cycling Editor of La Gazetta dello Sport, Italy’s daily sports newspaper.

It is now 0600 and the commentator over the PA system begins the countdown: “Cinquie. Quattro. Tre. Due. Uno.” The race is on, albeit slowly at first as thousands of cyclists gingerly navigate the first 50 metres past the sailing boats in Cesenatico’s port designed by Leonardo da Vinci, wheels and handlebars centimetres apart.

Ten minutes in and the pace speeds up as the espresso-and-adrenaline-fueled riders settle into the race. Italians may be known for their erratic driving but on a bike they are disciplined and controlled. Neat pace lines form on these closed roads, with faster riders cycling ‘through and off’ with their teammates down the left-hand-side of the road. With no teammates and a belly full of butterflies I cycle more conservatively on the right, getting a measure of the race.

It is here that I get true a sense of the scale of the event. The Carabinieri are positioned at each junction closing off the road to traffic. We are passed by dozens of motorcycles, some with pillion cameramen leaning off the back taking photos, others carrying spare wheels to deal with mechanical issues. Dotted along the route are applauding supporters (including my own enthusiastic group) and locals full of smiles for the cyclists.

We whizz through the small foothill towns of Martorano, Diegaro and Forlimpopoli when the pace suddenly slows. The clunking of gears as we reach a right-hand turn indicates that we have arrived at the first climb that takes us over Bertinoro and then Polenta.

I experience the environment that will be my company for the best part of the day: Long rhythmical climbs, swinging left then right and snaking their way through a green landscape, peppered with red poppies. Stunning views across steep valleys of cherry orchards, framed by the Apennine mountains. Small Medieval villages. Smooth but sometimes heavily potholed roads, which give the rider a nervy but exhilarating descent.

Descending the Polenta I witness a crash. Fresh from a light shower, the road surface is greasy and a rider three bike lengths in front loses traction and tumbles to the ground; the unmistakable clatter of carbon fibre hitting the road. I am in a group of seven riders so we accelerate to catch up with a passing ambulance and signal to the driver that there is a fallen rider behind us.

It is not long before we arrive at the second and third climbs, Pieve di Rivoshio and then Ciola. I test out a feed station – one of eight along the route. Laid out on long benches are bottles of water and energy drink and stacks of fast food, Italian style: cups of black coffee, grapefruit, oranges, apples, mini pizzas and small slices of panettone.

Well fuelled, I head for the fourth climb, Barbotto which boasts the steepest climb maxing out at an eye-popping 18%. After a long tough climb I receive an unexpected boost at the summit. There is a large group of cheering spectators and a hyperactive commentator encouraging the riders as they crest. My own small group of supporters, brandishing a Union Flag, had primed him. As I reach the top he announces over the PA: “Signor Inglese you’re the number one” over the National Anthem.

A satisfying descent follows before the climbs of Monte Tiffi, Perticara, Monte Pugliano and Passo delle Siepi, my legs beginning to feel hollow as the incessant climbing continues. Then, cresting the ninth climb, the Gorolo completing 3,840 m of climbing for the day, there is a long downhill stretch to the finish back in Cesenatico.

Some 8h57m after setting off I complete my first gran fondo. Crossing the finishing line in 2,611th place, my legs wobble and there is a sharp pain in the balls of my feet after tuning the pedals some 40,000 times. I am ushered to an enclosure. It is here that am rewarded for my efforts; I am presented with a small metal medal on a ribbon, a large bowl of pasta and an unforgettable memory of an extraordinary day on the bike." 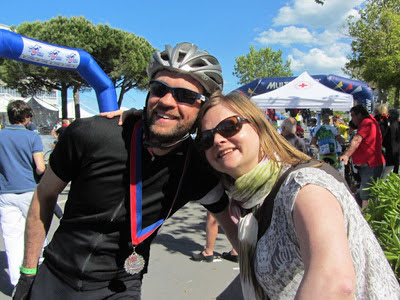 Related story: Museum dedicated to Marco Pantani: "Spazio Pantani" in the town of his birthplace, Cesenatico.

Stories for the Italian Cycling Journal about rides, granfondos, touring, having a good time cycling in Italy, Italian cycling history, racing, etc. are always welcome. Contact me at veronaman@gmail.com.
Posted by Angelo senza la o at 6:03 AM