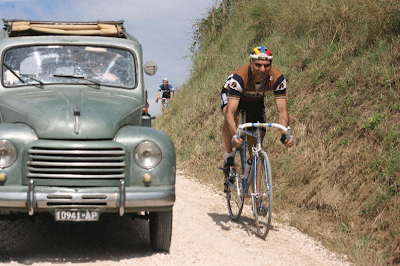 The introduction to this event here.

Part II:
Even the rain stopped to allow the event to take place, Sunday, June 20, over the white roads of Fermo (Marche).

Cyclists departed from Montottone escorted by motorcycles and cars, among them the legendary 600 "multipla", the flagship of the good old days.

There were many prizes for the riders for the best interpretation of cycling history. The first prize went to Giorgio Minora of Milan who rode a 1938 Legnano, the same model with which Gino Bartali triumphed in his first Tour de France; Minora also wore a tricolor jersey of Alfredo Binda from 1929. In second place, equal on points, was the former 1950s professional Angiolino Piscaglia riding his Ganna and wearing a Ghigi jersey. Amerigo Severini, many times Italiana cyclocross champion, rode his faithful Bianchi and one of his knit tricolor jerseys to a prize as well.

There was an extraordinary lunch for participants featuring local specialties such as Vincigrassi prepared in the traditional way as it had been by the peasants.

The inaugural event was very successful and also had the merit of bringing the phenomenon of vintage cycling to central/southern Italy.

Stories for the Italian Cycling Journal about rides, granfondos, having a good time cycling in Italy, Italian cycling history, etc. are very welcome. Contact me at veronaman@gmail.com. There are more than 1,400 stories in this blog. The search feature to the right works best for finding subjects in the blog and there is also a translate button at the bottom so you can translate each page.
Posted by Angelo senza la o at 7:00 AM

Email ThisBlogThis!Share to TwitterShare to FacebookShare to Pinterest
Labels: I Forzati della Strada