Passo dello Stelvio: one of "The Magnificent Seven" 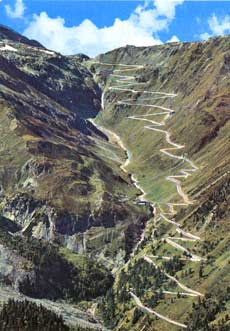 Bruce Hildenbrand, writing for ROAD BIKE ACTION magazine in the May, 2010, issue, writes about his favorite climbs in Europe. Hildenbrand has ridden more than 1000 passes in western Europe. The article, "The Magnificent Seven", begins with Passo dello Stelvio:

"European cycling magazines love to take polls about the best mountain pass in all of Europe. The north side of the Stelvio Pass, or Stilfserjoch, is almost always at the top of the list. The 48 numbered switchbacks (there used to be 50 until some car drivers knocked over the bottom two signs) climbing steeply for over 6000 feet are the hallmark of this Italian gem.

This pass is also very popular with cars and motorcyclists, so much so that on weekends, the constant whine of motorbikes can be an unpleasant distraction. It is best to plan your ascent on a weekday, or, better yet, on Stelvio Day-usually the last Saturday in August, when the pass is closed to everyone but cyclists.

Starting in Prad on the north side, the first six miles to Trafoi are a good warm-up for the unrelenting slopes ahead. It is eight and a hlaf miles to the summit from here, but the 8.5-percent average grade makes this a very tough grind.

The Stelvio marked the Italian-Austrian border during the Great War, and there were some epic battles. Don't miss the World War I museum on top of the Banco Populare di Sondrio building, which also includes some historic photographs depicting the construction of the road.

While not considered as classic as the the north side, the south side of the Passo Stelvio is a 5000-foot climb from Bormio. There are several, narrow, unlit tunnels where lights are recommended. Also, be careful of oncoming cars, as two-way traffic isn't possible in several of the galleries.

The Stelvio ranks third behind the Col de la Bonnette and Col de l'Iseran as one of the highest continuously paved passes. At over 9000 feet, be prepared for severe weather at any time of the year."

Stories for the Italian Cycling Journal about rides, granfondos, having a good time cycling in Italy, Italian cycling history, etc. are very welcome. Contact me at veronaman@gmail.com. There are more than 1,400 stories in this blog. The search feature to the right works best for finding subjects in the blog and there is also a translate button at the bottom so you can translate each page.
Posted by Angelo senza la o at 5:59 PM

Email ThisBlogThis!Share to TwitterShare to FacebookShare to Pinterest
Labels: Stelvio