The Associazione Velocipedisti Eroici Romagnoli (AVER) has kindly agreed to a mutual exchange of content with the Italian Cycling Journal. AVER is dedicated to lovers of the "heroic" age of cycling.

The following article, originally in Italian and which appeared in AVER in February 2010, is of the history of Masi.

"If Italy was considered the world capital for racing bicycles perhaps it is due to artisans such as Faliero Masi, who is now legendary. Faliero Masi was "il sarto" ("the tailor"). Since 1949, at the shop under the equally legendary Vigorelli velodrome in Milan, on via Arona, his welding torch was responsible for writing many memorable pages in the history of cycling. 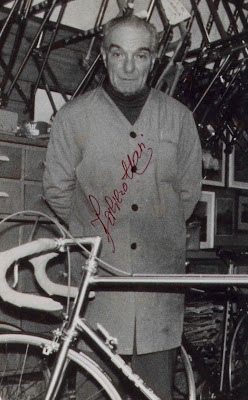 Born in Sesto Fiorentino on May 11, 1908, Faliero Masi learned the art of building custom race bikes at the "Compostini" workshop in Sesto Fiorentino. It is with Cicli Compostini that Masi began to race, participating in two Giro d'Itala (1931 and 1932). His only prominent victory was the “Coppa Zucchi” of 1933. He continued to race until 1946.

After ending his professional career, Faliero successfully embarked on a career as a framebuidler. First in his native Sesto Fiorentino and then in Milan where he moved in 1949 at the the insistence and pressure of well-known sprinter Aldo Bini from Prato. Among Bini's victories were two editions of the Giro di Lombardia (1935 and 1942).

The first workshop wasn on Via Michelino da Besozzo, a few months later he transferred to the curve under the Vigorelli where the workshop stands today. Faliero had a maniacal passion for every phase of the construction of a bicycle, built by hand, one by one. The success of the Masi brand is known worldwide: each of his bicycles is unique and are considered a jewel by fans. The Masi workshop today: 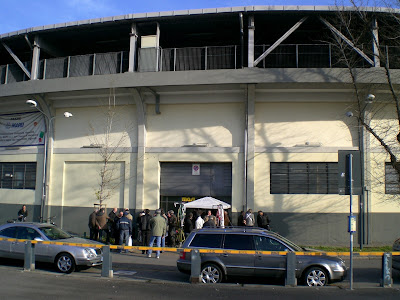 After his death in Milan, on January 4, 2000, he passes the title of king of the Italian craftsmen of framebuilding to his son Alberto who still continues the mission of the family with the same care and passion inherited from his father. The Masi brand is a brand that in the world of cycling means care, attention, almost obsessive thoroughness; still building bikes one by one, without overdoing it but always giving attention to even the smallest and trivial of details. (ed. note: as noted in the previous blog entry the Masi name was sold in 1972. Alberto Masi, still building underneath the Vigorelli, sells his bikes under the "Milano" name. In the USA, Alberto Masi's bike can be acquired through Milano Sport). Alberto Masi with Aldo Bini's "Ganna" that was built by his father: 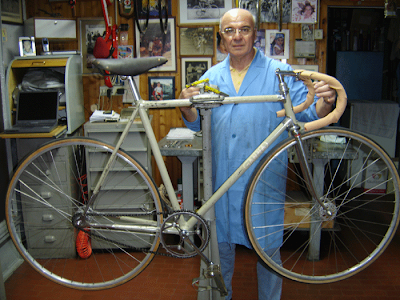 The Masi bicycles are unique because each is a made to measure, custom, frame for a client. Numbered pieces. Collectible bicycles, difficult to reproduce. Alberto is a kind of tailor, Stradivari's cycling, a Paganini (ed note: celebrated violin virtuosi) who leaves to go into the art of framebuilding, alone in his originality.

Cycling fans are willing to do anything to possess it. "There are people," Alberto explains in a recent interview, "which make great sacrifices to have one one day...". WINNING magazine likened Masi to a cult, like Ferrari or Rolls Royce.

Technique and experience: this is the secret that still makes Alberto Masi, master craftsman of the two wheels, grow. Small objects of worship which always make up the great two wheel world of the Masi archipelago.

Today Alberto Masi is 65 years. He began to frequent the workshop of his father Faliero at 8 years old. At 16 he debuted as the official mechanic of Fausto Coppi at the Giro d'Italia. In 1982 he built the "Volumetrica", the first race bike with oversized and ovalized tubing. Today Alberto Masi produces about 500 frames, of which 200 are complete bicycles." An Alberto Masi "Milano": 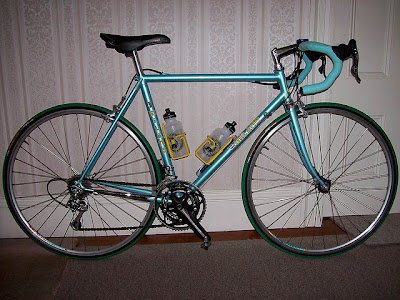 Photos: the photos that appear here did not accompany the original article

Stories for the Italian Cycling Journal about rides, granfondos, having a good time cycling in Italy, Italian cycling history, etc. are very welcome. Contact me at veronaman@gmail.com. There are more than 1,600 stories in this blog. The search feature to the right works best for finding subjects in the blog. There is also an Italian weather widget along the right side and a translate button at the bottom so you can translate each page. What I'm riding.
Posted by Angelo senza la o at 5:50 AM

Email ThisBlogThis!Share to TwitterShare to FacebookShare to Pinterest
Labels: Masi