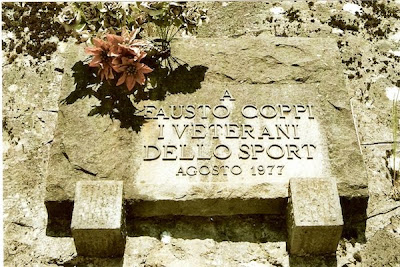 Jac Zwart, author of the Dutch language book "Wielermonumenten - Reisgids door de geschiedenis van de wielersport" (Cycling Monuments - Travel Guide through the History of the Sport of Cycling), contributes his seventh article, this time about a Fausto Coppi plaque at the Passo Abetone.

"The year 2010 moves to an end. It has been the year in where people have commemorated that fifty years ago the great Fausto Coppi has passed away. I am pretty sure that the number of memorial signs for this almost mythical person has increased for this reason. However, a monument that exists since 1977 can be found near the summit of the Passo Abetone. This pass, with its height of 1388 meters, is located north of the town of Pistoia. In a curve of the SS12, near the road mark 82 VII (approximately 5.9 km from the top of the pass), there is a bronze plaque. In 1940 Fausto Coppi laid here, during this climb in the stage from Firenze to Modena, the fundamentals for his first victory of a series of 58 stage victories in a Giro d'Italia in total.

Coppi was just twenty years old and still completely unknown, except by insiders. He was a 'gregario' in the Legnano team, led by Gino Bartali. In the fifth stage Bartali encountered some problems, caused by a fall three days before. While some riders attacked, Coppi asked the team management for permission to follow. He managed to join the leading group, but later on he lost precious time due to a fall whereby his bike got damaged. The eleventh stage appeared to become the most important one, with the climb over the Passo Abetone which was included in the Giro for the first time ever. Coppi attacked there and despite the rain and the hailstorms he succeeded in winning this stage. His lead in time was that large that he obtained the pink jersey, for the first time in his life. It was much to the disgrace of Bartali who appeared to have had mechanical problems. His opinion was that Coppi had betrayed him and he even threatened to leave the Giro. However, the team management of Legnano persuaded him to continue and asked him to help Coppi to defend the pink jersey. And so it happened. During a mountain stage Bartali helped Coppi to overcome some difficult moments and showed himself a loyal team mate. In the Dolomites, in a stage where the Falzarego, the Pordoi and the Sella passes had to be conquered, they escaped the bunch and arrived together in the town of Ortisei, where Bartali won the sprint. That stage decided the 28th edition of the Giro.

Coppi kept the pink jersey, arrived in Milano with a time advantage of 2'40" on Enrico Mollo and 45'9" on Bartali, who was classified as ninth and became king of the mountains. Years later, in 1947, Coppi also won a stage with the Passo Abetone and won the Giro for the second time.

The region of the Abetone is a well-known skiing area in Italy. Two of the ski runs honor the name of Fausto Coppi, who wrote cycling history here in 1940.

Stories for the Italian Cycling Journal about rides, granfondos, having a good time cycling in Italy, Italian cycling history, etc. are very welcome. Contact me at veronaman@gmail.com. There are more than 1,600 stories in this blog. The search feature to the right works best for finding subjects in the blog. There is also an Italian weather widget along the right side and a translate button at the bottom so you can translate each page. What I'm riding.
Posted by Angelo senza la o at 7:33 AM