The Return of Rossin, Part II 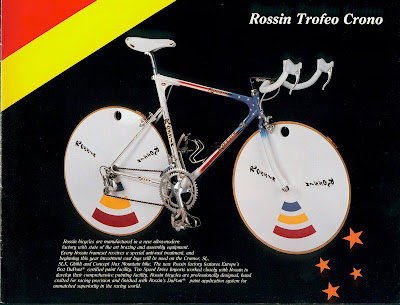 Nick from Grupetto Italia, of England, provides a new new update on the Rossin portfolio of products. Nick from Grupetto Italia, writes, "Rossin will be a familiar name to anyone who has followed bike racing in Europe over the past 4 decades having supplied its Italian made bikes to some of the most successful teams in professional racing during this period. It is now ready to make a welcome return in the UK exclusively through purveyors of all things good in Italian bikes, Grupetto Italia...

The Rossin name will be remembered by many with ‘Day Glo’ tinted specs as the ultimate late eighties racing machine (with the loudest paint jobs on the road). Rossins were ridden by some of the best riders of the time including Roger De Vlaeminck and his Daf trucks team and the Dutchman Hennie Kuiper who won both Milan San Remo and Paris Roubaix on Rossin bikes. Kuiper leading in 1985 Milan-San Remo: 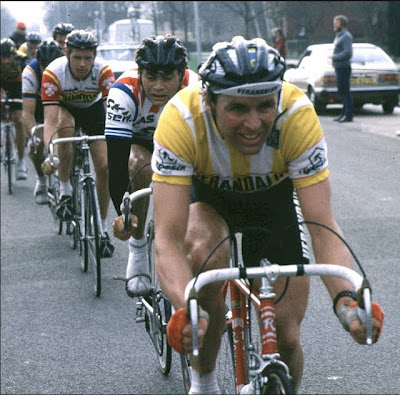 Established in 1974, Mario Rossin who had worked for Ernesto Colnago for years was respected as one of the best frame builders in the business with a reputation as a wizard for measuring and custom building for the top Italian riders, so when Rossin started doing his own thing it was no surprise that racing success soon followed.

Italian riders like Gibi Baronchelli who had ridden his bikes as an amateur soon helped Rossin move into the Professional ranks and in early 1976 the GBC Itlia squad were the first of many teams to lineup on Rossin bikes at the Laigueglia Trophy, the traditional early season opener and the rest as they say is history.

It was a Golden era for the Italian cycle industry and Rossin developed many of the advances in technology that other builders later adopted, including the first sloping top tubes and ‘horned’ handlebar TT and track bikes used by both the Russian and US team at the LA Olympics; remember Eric Heiden, he rode Rossin and later by Viatchelav Ekimov when he claimed the Indoor hour record on a Rossin by riding 49.672km.

In 1983 Rossin developed the very first Disc wheels on their ‘FuturaCX’ bikes and they are also credited with equipping one of their bikes with the first onboard computer. In 1980 a little known rider called Alesandro Pagenessi was used as a guinea pig during the Settimana Lombarda mountain time trial, coming second only to the great polish rider Cezlaw Lang – apparently the computer was the size of a brick lashed to his bars but look what a revolution he started. Moreno Argentin later wore pink at the Giro on a Rossin and the company continues to this day to push the established ways of building racing bicycles aimed at the very best riders at the highest levels of competition.

This constant striving for advancement in making bikes both faster and better performing is still evident today in the new range of Rossin Bikes. The range is led by the fantastic looking Ghibli made from 1K high module carbon, the chunky yet aerodynamic head tube looks glorious up front with the monostay and integrated seat post (ISP system) at the back making this pure Rossin magic – although you’ll be glad to know the paint finish, (whilst lustrous) is much subtler than in previous times. 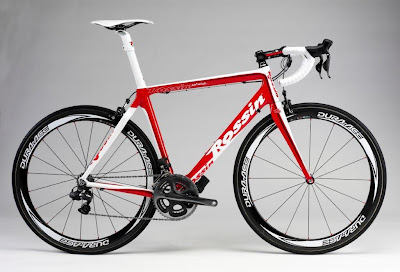 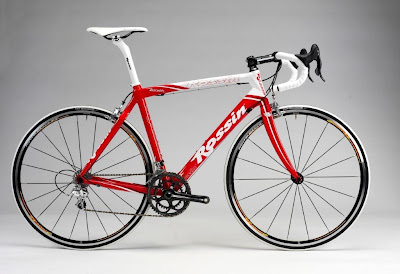 More information can be found on the Grupetto Italia website.

Photo (top): Always at the front of innovations, Rossin have been instrumental in some of the most radical thinking, working alongside the best riders they have always prided themselves on researching and developing the best new ideas

Stories for the Italian Cycling Journal about rides, granfondos, having a good time cycling in Italy, Italian cycling history, etc. are always welcome. Contact me at veronaman@gmail.com. There are more than 1,700 stories in this blog. The search feature to the right works best for finding subjects in the blog. There is also an Italian weather widget along the right side and a translate button at the bottom so you can translate each page. What I'm riding.
Posted by Angelo senza la o at 7:20 AM

Email ThisBlogThis!Share to TwitterShare to FacebookShare to Pinterest
Labels: Rossin