Origin(s) of Bianchi Celeste, and more

BikeRadar recently had an article about a visit to Bianchi in Treviglio, outside Milan. I found the section about the origin of Bianchi "celeste" interesting:

"This Bianchi celeste green has many stories behind it. One tale spins it as the turquoise color of the Milan's sky, another suggest that it was the eye color of the former queen of Italy for whom Edoardo made a bicycle. The latter story is likely pure myth as there was never a queen Tiffany of Italy—and neither Queen Margherita of Savoy (for whom the actual Margherita pizza is in fact named) nor her daughter-in-law Elena of Montenegro had turquoise eyes.

The truth is less inspiring, but no less interesting. The most likely origin of the paint is that it was a mixture of surplus military paint from the First World War, it was cut with white in order to tone down its martial nature. Regardless, this color continues to evoke the tradition that is Bianchi, and in that is quite inspiring for riders of the famous bicycles."

While not mentioned in the article, at one point Bianchi considered changing their famous color (click to enlarge): 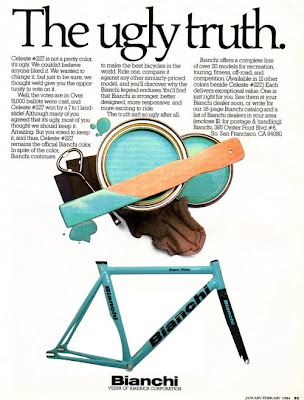 And, while we are at it here is a short video showing how Bianchi assembles bikes (virtually all bike production is in Asia now), not an assembly line process but each one is assembled individually; also, some frame testing:

Bianchi Movie from Bianchi on Vimeo. 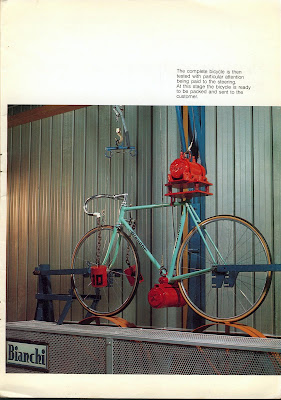 Stories for the Italian Cycling Journal about rides, granfondos, touring, having a good time cycling in Italy, Italian cycling history, etc. are always welcome. Contact me at veronaman@gmail.com. There are more than 2,200 stories in this blog. The search feature to the right works best for finding subjects in the blog. There is also a translate button at the bottom so you can translate each page.
Posted by Angelo senza la o at 2:39 AM