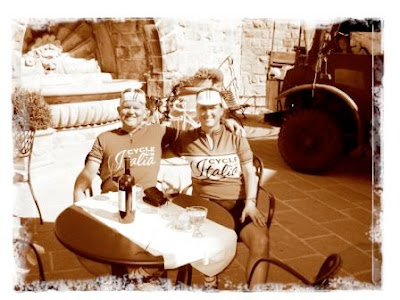 CycleItalia writes in to say that they are are celebrating their 15th year anniversary of offering cycling tours in Italy.

In the words of owners Larry and Heather, "CycleItalia was inspired by the culture of Fausto Coppi and Gino Bartali, when "steel was real" and Campagnolo was on its way to being king. Major bike races were followed not only by those at the roadside but also the daily newspaper La Gazzetta dello Sport, and later by radio broadcast. With no video and few photos, the journalists and broadcasters of the day had to be creative and eloquent to capture the imaginations of their readers or listeners; they transformed the sport's heroes and villains into mythic characters of epic proportions.

We've never lost this romantic notion of cycling, though we're long past our own racing days. Now our desire is to recreate that "come una volta" ("like it used to be") atmosphere in which cycling and friendship are shared along with hearty meals in the countryside through which we pedal. Italy is still the best place in the world for this, as demonstrated by the explosion of vintage bicycle (bici di epoca) rallies, such as Tuscany's L'Eroica, where the food and wine and the sense of history are as important as the ride.

As the modern world of cycling moves toward electronically controlled machines of ever-more exotic materials, and fuel for cycling devolves into chemical goo squeezed from mylar packets, we look back to the era when cycling was less scientific, but more fun. Our tours are far from easy, but they embrace a spirit of enjoyment derived not from who can ride the fastest or who has the fanciest bike, but simply from the timeless joy of cycling in Italy "like it used to be." 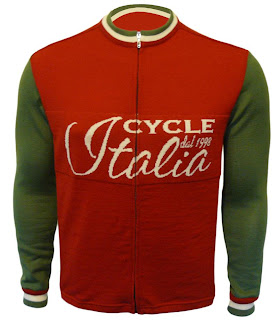 To celebrate their anniversary they are offering a 100% merino wool, long-sleeved trainer/sweater to those that reserve a CycleItalia 2013 guided tour before December 1, 2012. Visit www.cycleitalia.com for more details.

Larry has shared some some  stories with us in the past:
First Hand Report: Colle delle Finestre
Why We Took Up Cycling in the First Place
CycleItalia Cortina Loop

A guest on one of CycleItalia's tours, Rich, wrote several stories for us; a couple of them here:
Training for Italy
The Most Beautiful Climb

Good time for a reminder: stories for the Italian Cycling Journal about rides, granfondos, touring, having a good time cycling in Italy, Italian cycling history, racing, etc. are always welcome.

Email ThisBlogThis!Share to TwitterShare to FacebookShare to Pinterest
Labels: CycleItalia