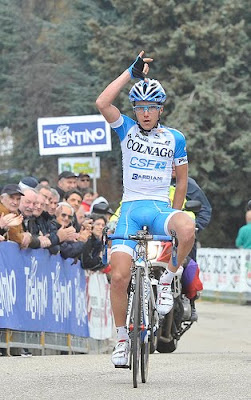 Basilicata's diminutive Domenico Pozzovivo (Colnago-CSF) is said to be transferring to French team Ag2r-La Mondiale for the 2013 season. Pozzovivo had a great season winning the Punto Veleno stage (above) of the 2012 Giro del Trentino which catapulted him to overall victory; it was the first time the climb has ever been included in a professional race. He also went on to win stage 8 of the Giro d'Italia and finished 8th overall. The signing of Pozzovivo would help AG2R-La Mondiale retain its position as a WorldTour team next year.

Do you know the meaning of the winning gesture that Pozzovivo makes when he crosses the finish line? 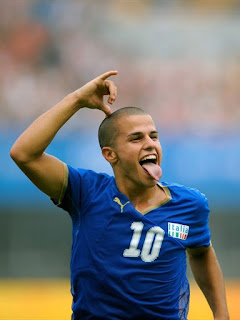 The gesture dates back to  August 7, 2008, when Sebastian Giovinco, the Juventus midfielder, scored a beatuful goal at the 2008 Olympic games. Giovinco then ran to photographers, placing his thumb on his head and sticking his little finger into the air. What was the goal celebration about?

“It comes from the fact that I am not very tall and people always said that I would never make it as a player because I was too small,” Giovinco explained. “So every time I score a nice goal, I make the gesture which increases my height!"

Addendum: On September 14, 2012, AG2R confirmed that Pozzovivo had signed a two year contract.

Email ThisBlogThis!Share to TwitterShare to FacebookShare to Pinterest
Labels: Pozzovivo