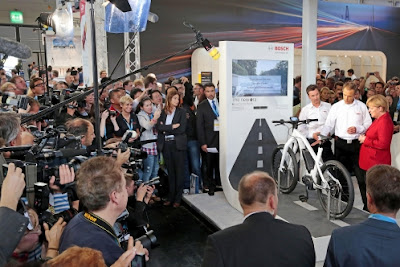 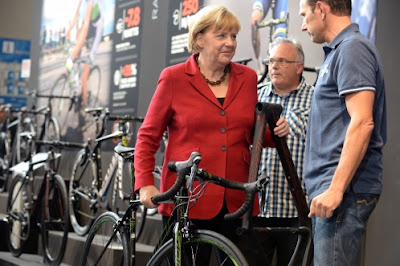 Friedrichshafen - "In no other invention is utility so inherently combined with a pleasurable experience as on a bicycle,” German Chancellor Angela Merkel said, quoting Opel founder Adam Opel when she opened Eurobike on Wednesday, 28 September 2013. While she has had less opportunity to adhere to this principle since being invested with Germany’s highest political office, she has ridden a bicycle since she was a little girl. "Eurobike is equally as important as Cebit and the International Motor Show. A comprehensive appraisal of transport in our times necessarily includes the bicycle. Germany is not just a car nation, it is also a bike nation,” the premier stressed.

On the opening day of Eurobike - the leading international trade fair for bicycles and cycling - the key players in the bike industry presented the trends and new products for next season and the German Chancellor revealed that the cycling trend had made its mark on public policy: "With the cycle traffic plan 2020, we are committing the German Government to promoting cycling. We aim to create the conditions that will encourage those who have perhaps thought about cycling to take it up.” The Chancellor particularly thought that the boom in e-bikes could be an attractive prospect for older generations, enabling them to enjoy cycling on any terrain. A combination of different modes of transport was an important approach to persuading as many people as possible to take up cycling, Angela Merkel said.

At the opening ceremony, Bernhard Lange, President of the German Bicycle Industry Association, said: "Cycling has become a megatrend, with everyone meeting in Friedrichshafen at the leading cycle trade fair, Eurobike - the global showcase of the cycle industry and mobility worldwide.” He noted that cycling had arrived in the political world and had become a securely anchored part of mobility, and added: "While the use of the bicycle for leisure and sport purposes achieves general health benefits, the bike is of huge importance as an environmentally friendly means of transport in a future-capable, sustainable mobility concept."

Stories for the Italian Cycling Journal about rides, granfondos, touring, having a good time cycling in Italy, Italian cycling history, racing, etc. are always welcome. Contact me at veronaman@gmail.com.
Posted by Angelo senza la o at 5:44 AM

Email ThisBlogThis!Share to TwitterShare to FacebookShare to Pinterest
Labels: Eurobike