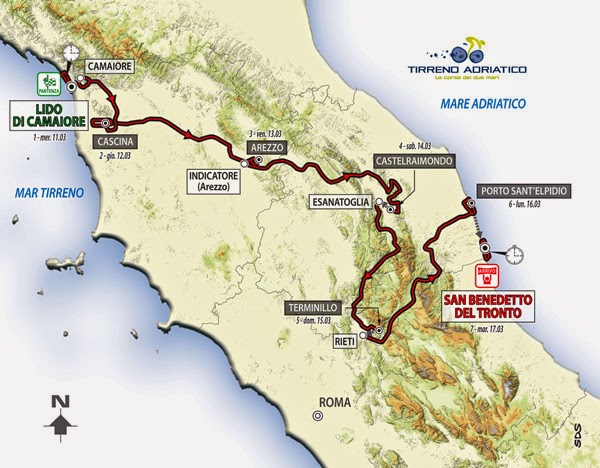 The pre-race press conference of the 50th Tirreno Adriatico 2015 took place this afternoon at race headquarters in Lido di Camaiore.

The 'Race Between Two Seas' starts tomorrow with a 5.4km individual time trial (due to the extreme weather conditions that have affected Tuscany and in particular the area around Versilia it became necessary to modify the first stage from a long team time trial to the 5.4km individual time trial). The peloton is packed with other great riders, including General Classification contenders Bauke Mollema, Joaquim Rodríguez, Daniel Martin, Thibaut Pinot and Jurgen Van Den Broeck; sprinters Mark Cavendish, Elia Viviani, Sacha Modolo and Luka Mezgec; and attackers such as Greg Van Avermaet, Filippo Pozzato and Edvald Boasson Hagen.

The riders who took part in the press conference made the following statements:

Alberto Contador: “For me, this year is a bit different from last. I’m in good form, Andalucia gave me some confidence. At every moment, in my head, I have the Giro d’Italia. This year, I want to try to win every race I ride, but at the same time I’m thinking of the Giro. It’ll be hard to win Tirreno Adriatico again, given the high level of my rivals. It is true that Froome is not here, but the winners of the Tour de France and the Giro d’Italia are here, so my approach will not change. As for where the race will be decided. I don’t know the Terminillo, so I don’t know how selective it will be. But I will take it day by day, stay concentrated so the the race doesn’t slip away from me and, in the end, we’ll see. But in all probability, on the final day, I will have to ride a good time trial.”

Vincenzo Nibali: “My year has started differently from last year. In 2014, my objective was the Tour, but after riding the Giro and the Vuelta, I struggled to find my rhythm. This year, my goals are the same, but I have tried to work harder in the winter. I’m not in my Tour de France condition, and I haven’t ridden against Alberto [Contador], Rigoberto [Urán] or Nairo [Quintana]. They are all great riders, and Alberto has had great results already this season. So we’ll see day by day and, if I feel good one day, I’ll see what I can do, and then we’ll see how the GC goes.

Rigoberto Urán: “I have a good team around me and I have come here to do well. We would have been competitive in the team time trial, but in the end the modifications change nothing for me. The race goes on. In any case, it is always special to race in Italy, and tomorrow will be memorable for me because I will wear the jersey of the Colombian national time trial champion for the first time. I hope the Colombian fans come out, and I will try to do my best for them.”

Nairo Quintana: “I’ve been out of competition for some time so this race is very important for me. I was second last year, but my goals were very different then. I’m calm, it’s my first race in Europe, and there are some strong rivals around me. For me it will be a race for fine-tuning form, getting some kilometers in my legs and finding some rhythm. I love racing in Italy because of the passion of the fans.”

Fabian Cancellara: “I would like to say ‘Well done’ to the organizers. Security is the most important thing and the changes they have made show that they are thinking of us. I came here to work for Bauke and Julian, and to put them in a good position to fight for the General Classification. To change objectives from one day to the other is mentally hard, although I’m used to it. Now I’ll ride alone. I could do well, but a 5.4km time trial is very short, and it means that a lot more riders are in with a chance.”

Peter Sagan: “Strade Bianche was my first really hard race of the season. I attacked very strongly because that was how I was feeling. One year it works, the next it doesn’t. I am in good shape here at Tirreno Adriatico and you’ve got to have a go. I’m here to try to win. I won’t be waiting for Arezzo, where I won last year. I intend to be in the sprint tomorrow, and we’ll see how it goes.”


THE STAGES, March 11-March 17
The race will start from Camaiore’s renowned Lido, in the Italian Versilia region, with a 5.4km individual time trial.. The first rider, Davide Villella, will leave the start ramp at 1.10pm CET tomorrow afternoon; the last rider, Alberto Contador, will start at 4.04pm.

The second stage, starting from Camaiore and finishing in Cascina (153km), is mostly flat and is likely to see the fastest wheels in the peloton sprint for the finish.

Cascina will be the starting location of the 203km third stage and, as per last year, will end up in Arezzo on the same climb that saw Peter Sagan win.

Saturday the 14th will see a deceptively challenging 226km fourth stage, held predominantly between the Umbrian and Le Marche regions. The stage will start from Indicatore (Arezzo) with four King of the Mountain climbs: Foce dello Scopetone, Poggio San Romualdo and the final Crispiero climb twice just before the short descent towards Castelraimondo.

The 197km Queen stage will be held on Sunday 15th, starting from Esanatoglia and finishing at the summit of Monte Terminillo (1,675m), with two KOM climbs in the initial and central phases of the day (Passo Sallegri and Le Arette climbs).

The 210km penultimate stage, which is ideal for sprinters, will bring the peloton from Rieti to Porto Sant’Elpidio.

The 50th edition of the “Race of the Two Seas” will again come to a close in San Benedetto del Tronto, with a final-day 10km Individual Time Trial crowning the winner of the Tirreno Adriatico.