My friend Eros has joined inGamba, a cycling vacation company specializing in European trips. If you are interested in riding with Monsieur Ventoux you can see the rides he is leading in the calendar. Following is the announcement from inGamba: 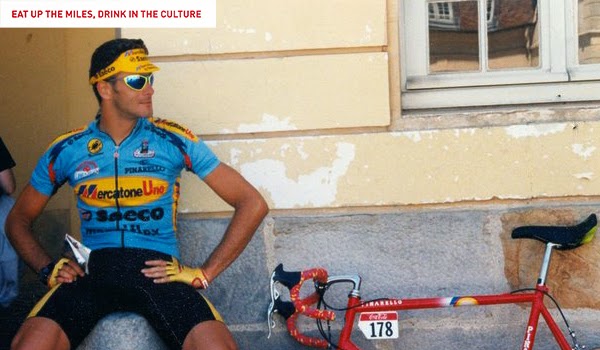 He was never supposed to win. Especially not on the Tour de France's most venerated mountain. Sure, he was prized as Mario Cipollini's sprint lead-out man, but as a climber? Forget it. He weighed more without a bike than most of his competitors did with one, and towered above them all at 1.94 metres tall. He'd had a stellar amateur career, but turned pro late, aged 28. He was an excellent domestique, but not a doyen. No, Mont Ventoux wasn't meant for him.

And yet, Eros Poli took it anyway. The Giant of Provence was conquered by a giant from Verona with a breakaway so audacious that his rivals ignored it. They thought it was the very definition of folly. It was, in fact, the definition of panache.

It was the kind of romantic win befitting a guy called Eros. Cipo, the greatest sprinter of his generation and Poli's team leader, had crashed out of the Vuelta and missed the Tour. Mercatone Uno were without a leader for La Grande Boucle, and so the the workers were let off the chain. It was a rare opportunity to impress at the season's biggest event, and one that Poli took by the scruff of the neck.

Attacking solo some 100km before Ventoux, the Veronese knew that he'd need a huge lead to stay ahead of the pack once the flat stage turned nasty and the road started heading skyward. He did the math. Accepted he'd need at least 24 minutes at the foot of the mountain – a minute for every kilometre climbed with an extra cushion, just in case. And then he went to work.

When the early ramps of the ascent arrived, he was leading by more than 25 minutes. His opponents didn't know it yet, but they'd already sealed their fates. The peloton's big guns fired, but Poli was out of range, flying in spite of his bulk and his loneliness out in front. Not even an attack from a young Marco Pantani could bring him back. He crossed the summit four minutes ahead of il Pirata. Forty kilometres to the finish, but now he had gravity and adrenaline and a lifetime of ambition on his side. The stage, and a unique place in the history books, were his.

Miguel Indurain would go on to win the fourth of his five yellow jerseys that summer, but the undisputed star of the 81st Tour de France was Poli, thanks to one of cycling's greatest ever solo attacks. He did more that day than just win a stage that day in Carpentras; he won the hearts of cycling fans the world over. Because even if he was one of the tallest guys in the peloton, his was a victory for the little guy, and proof that, once in a while at least, spirit and guts could triumph over stacked odds and overwhelming adversity.

The following morning, La Gazzetta dello Sport called Poli's win a national triumph for Italy. The director of the Tour, Jean Marie Leblanc, would later call him a hero. Two decades on, the French still lovingly call him Monsieur Ventoux. We're just happy to call him a friend.