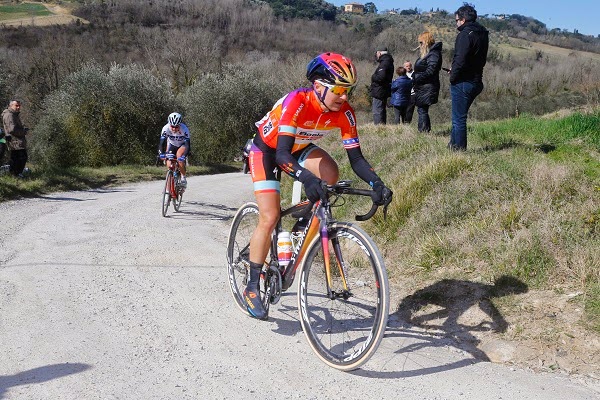 How the race unfolded: “My team-mate Christine Majerus was in there early, but on the gravel section, where Lizzie attacked, we lost her. I attacked on the second to last gravel section, so I got to ride the last one on my own. I don’t know if I’m a good time trialist, but I knew I had to stay within myself. I didn’t really know what was in store for me. I knew I had to put all my cards into that move and concentrate on the finish. I never really had a really large gap.”

The white roads: “I loved the course. I think it was a hard course, and it makes it more of a woman-to-woman battle than a matter of team tactics, because it becomes a select field by the end. But the course was amazing, and hard, I love the Strade Bianche. I really wasn’t looking around so much today. It was incredible because you had the climbs and the wind, which was surprisingly strong. I was told it would be windy, but when we got to the places where it hit us, it was surprisingly strong. It was a very complete race: you needed power to get through the wind, and you needed to hit the hard climbs, too. The course was enjoyable, the people along the sidelines were enjoyable, but I probably missed a lot of really great views today.”

Biggest career win: “A win like this was long overdue, but on my father’s side, my great-great-great-grandparents are from Tuscany, so what better place to do it than here? It really hasn’t sunk in yet, and I’m sure I’ll wake up tomorrow morning and, like, did I really do that? It’s just an incredible race and to do it here is amazing. Everyone is really excited about this race. When it was announced, everyone started looking forward to it. A lot of women’s teams were here early to look at it and prepare. More races like this, please.”

With 10 km to go these three riders led the race, with a 15" lead over the chasing group. In the final moments of the race Van Avermaet attacked on the final climb, dropping Valverde, Stybar countered and won by 2". 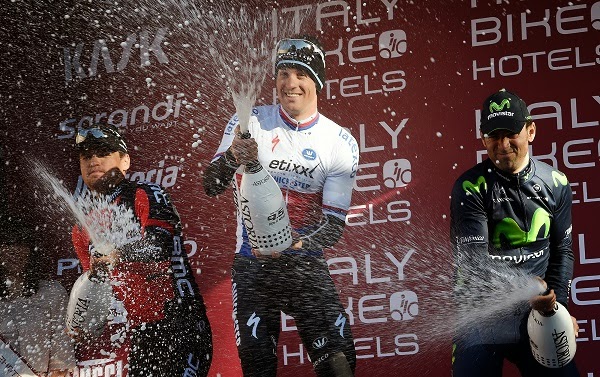 Decisive break: “It was really difficult because I didn’t want to underestimate Greg, because he’s very explosive, but Valverde is a very big opponent, and with an uphill finish he was always going to be really, really strong, and of course he was waiting for the final climb. In the last 10km, I wasn’t sure how he felt, because when I had to close the gap on Greg, he didn’t want to help because he said he had cramp, but he couldn’t have followed Greg on the climb if he’d had cramp. But I it was really important not to underestimate either of them.”

Final kilometer: “I was just staying on Alejandro [Valverde]’s wheel because I was expecting him to go first, to attack on the steepest part. But Greg surprised me when he attacked at the bottom and kept his speed to the top. I didn’t known whether to stay on his wheel or to stay with Alejandro, but in a millisecond I decided to go because I saw that Alejandro was dropping back. At the top I knew that I had to attack because whoever comes first with 200m to go wins. So I did. Finishing alone in the square in Siena is something I will never forget.”

Back from injury: “It was difficult to re-start after the accident at the ENECO Tour, where I lost 3 teeth and broke the 2 beside them. For the first time in my career I had 4 months without racing. It may have helped me. In mid-January I had a dental implant. The last stitches came out in Mallorca on Thursday, but after training yesterday I said I had to go to the dentist or I will lose them. So I saw a dentist yesterday, he solved the problem, and today I won Strade Bianche.”