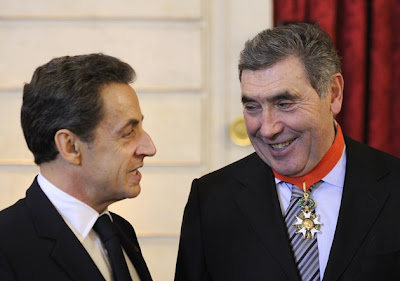 "It’s a considerable honor," said Merckx, who was initially made Chevalier at the start of the 1975 Tour de France.

The Legion of Honour, or in full the National Order of the Legion of Honour (French: Ordre national de la Légion d'honneur) is a French order established by Napoleon Bonaparte in 1802. The Order is the highest decoration in France. There are five levels: grand croix (grand cross), grand officier (grand officer), commandeur (commander), officier (officer) and chevalier (knight).

Merckx won the Tour de France five times, the Giro d'Italia five times, the Vuelta a España once, won all the monuments* of cycling at least twice, with 19 monument victories in all, won the world championship once as an amateur and three times as a professional, and broke the world hour record.

Stories for the Italian Cycling Journal about rides, granfondos, touring, having a good time cycling in Italy, Italian cycling history, etc. are always welcome. Contact me at veronaman@gmail.com. There are more than 2,200 stories in this blog. The search feature to the right works best for finding subjects in the blog. There is also a translate button at the bottom so you can translate each page.
Posted by Angelo senza la o at 4:22 PM