I asked Eros Poli (watch the video) about this climb and he recounted the following story from 1986. Keep in mind that in 1984 Eros had won a gold medal in the 1984 Olympics and went on to win the Mont Ventoux stage in the Tour de France in 1994.

"I first did this in 1986 with my racing bike, other times later with a mtb. That day, in 1986, I was using a 39-23. I remember that I had been training with Valerio Piva (a coach for Cavendish at HTC) and Sorensen. We had finished a giro of Lago di Garda and I asked Piva if he knew where this climb started. He knew it but had never climbed it himself.

They continued on home and I went in search of the road and began the ascent. Soon I found three old men at a bar and asked them if I was on the right road. They said, "Yes, but you won't be able to make it". I responded, "If I don't make it and you are still here anything you want will be on me."

Well, it was TERRIBLE! After the switchbacks I would have to ride a small circle in order to gain a moment of rest and some speed for the next stretch. I did make it to the top."

Eros is no stranger to some suffering, photo from Mont Ventoux stage: 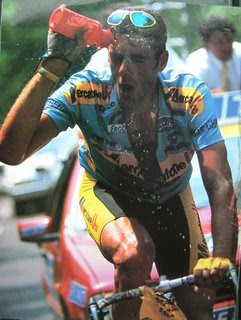 Stories for the Italian Cycling Journal about rides, granfondos, touring, having a good time cycling in Italy, Italian cycling history, etc. are always welcome. Contact me at veronaman@gmail.com. There are more than 2,200 stories in this blog. The search feature to the right works best for finding subjects in the blog. There is also a translate button at the bottom so you can translate each page.
Posted by Angelo senza la o at 6:06 AM