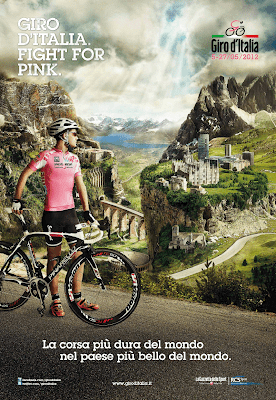 Chatter on the channels:
The toughest race in world's most beautiful place ("La corsa più dura del mondo nel Paese più bello del mondo”), the Giro d'Italia, is considering, or having, discussions with the UCI to alternate Tour de France and the Giro d'Italia each year during the months of May and July. That is, the Tour would be held in July one year, the Tour in May the following year as the Giro takes its place in July, etc.

The Giro d'Italia is increasingly facing the problem of attracting the top riders to the May event. This year, only four of the top twenty riders in the UCI's WorldTour ranking participated. Mauro Vegni, who represents RCS Sport (organizer of the Giro) at the UCI, is quoted as saying, "Cycling should take care of its most important races, we'll ask the UCI to protect the Giro." And, about alternating with the Tour, "Why not? Think of a stage like Alpe di Pampeago or Passo dello Stelvio during vacation time! Can you imagine how many people would be on our roads?".

It seems to me a proposition that the ASO/Tour de France would never accept.

It does leave open the question as to how to make the Giro d'Italia more relevant in the future and stop it's gradual slide in importance compared to the Tour de France.

Related story:  The Future of Tirreno-Adriatico, Milan-Sanremo and Il Lombardia