The terrible climb of the Muro di Sormano is back in the route of the 106th edition of the Il Lombardia (formerly named the Giro di Lombardia), exactly 50 years after the 15% climb proved so difficult that many riders were forced to get off their bikes and walk. This year the Muro di Sormano, the short but very steep climb near Lake Como, comes after 165km of racing and will be followed by the climb to Madonna del Ghisallo and the short climb to Villa Vergano, where Oliver Zaugg attacked to win the 2011 edition of Il Lombardia. Click on image to enlarge: 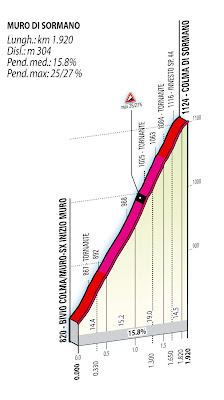 The 2012 edition of Il Lombardia will be held on Saturday September 29 and celebrates Felice Gimondi’s incredible career in the year of his 70th birthday with the start in Bergamo. Twenty-five teams will ride Il Lombardia (18 UCI WorldTour teams and 7 Wild Card invitations). Coming just six days after the UCI World road race championships in Limburg, this year’s Il Lombardia will be a real revenge match between the best riders in the world.

The last time the Il Lombardia climbed the Muro di Sormano was in 1962 when Johannes de Roo of the Netherlands won the race. Fausto Coppi is the most successful Il Lombardia winner of all time, winning consecutive race in 1946, 1947, 1948, 1949 and 1950. 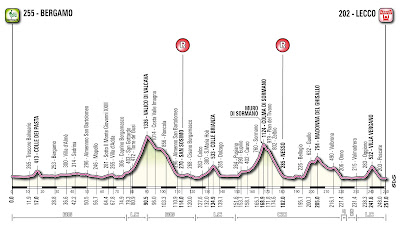 The 2012 Il Lombardia starts in Bergamo and after some early hills, tackles the Valcava climb (9.6km long at 9% and an altitude of 1336m). A technical descent takes the race to the Bergamasca Plain and then to the Brianza hills. The Muro di Sormano begins just after Maglio. It is only two kilometres long but has a 15% average gradient. The road is narrow but has recently been resurfaced, with tight hairpin corners that climb at between 25% and 30% at the mid-point of the climb. After Colma, the road descends to the lakeshore and Regatola di Bellagio, and then heads to the Ghisallo. The roads climbs to 754m with an average gradient of 14%. The descent to Asso is very fast and takes the race to Oggiono and the final climb to Villa Vergano, that has a gradient of 15%. The road then descends towards Lecco for the finish on the Isonzo lakeshore.