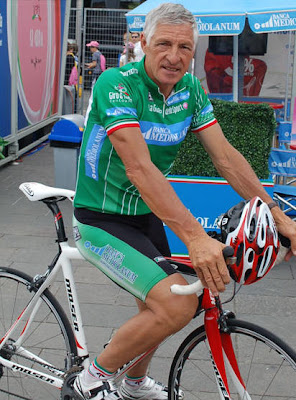 Francesco Moser, one of the world’s most iconic riders of all times, will be attending the Gran Fondo Giro d’Italia Los Angeles-Pasadena on July 21 and 22, 2012.

Francesco Moser is a living legend of cycling: with an impressive record of 273 career victories, he is the third most winning professional in cycling history! Because of his strong presence in the peloton, he earned huge respect and was nicknamed “the sheriff.” He dominated the global cycling scene from the early ‘70s to the mid -80s.

Moser was an innovator in the sport, and one of the first to understand the importance of aerodynamics on the bicycle. In January 1984, he astonished the world by beating Eddy Merckx’s world hour record with an incredible 51.151 kilometers (31.78 miles), besting Merckx’s 12 year old record by 1.72 kilometers (1.07 miles)! Later in the same year, Moser won The Giro d’Italia, in a dramatic time trial final stage against French athlete Laurent Fignon, who was leading with 1’21”. He won the stage using his special aerodynamic time trial bicycle and took the overall title in the Giro, by 1’03” over Fignon. The time trial was memorable and redefined the standards of the sport. Moser’s success changed bicycle design dramatically, by proving that aerodynamic equipment such as disk wheels were a winning formula for races against the clock. In May of the same year, He won the final stage by a 1’03” lead, in a dramatic time trial against French athlete Laurent Fignon. In his career, he won two World Championship, one in the road race (1977) and one on the track (individual pursuit, 1976). His remarkable victories in the one day classics include three in a row at the grueling Paris-Roubaix race 1978-1979-1980), two Tours of Lombardy (1975 & 1978), Milano - San Remo (1984), Fleche Walloon (1977), Paris-Tours (1974), and Gent Wevelgem (1979).

Today the champion is enjoying la Dolce Vita and is a successful wine producer in his beloved region, Trentino (Italy). While keeping in shape with daily rides, Moser is now focused on his winery, Cantine Moser (www.cantinemoser.com), producer of superior wines including Gewuertztraminer, Muller Turgau, Moscato Giallo and especially a superior Spumante Trento DOC, branded “51.151” just like his epic world hour record time, which features a pink label, in honor of the Giro D’Italia winner’s jersey!

Francesco Moser will be in Pasadena to celebrate the inaugural Gran Fondo Giro d’Italia. In addition to starting the ride on Sunday morning, July 22, the champion will attend the VIP evening reception on Saturday, July 21 and will be available Saturday afternoon, July 21st, in the expo area to meet and greet fans and cycling enthusiasts. There will be photo and autograph opportunities. For additional information please visit: www.gfgiro.com.

Related story: Video of the recent opening of the Moser Museum

Stories for the Italian Cycling Journal about rides, granfondos, touring, having a good time cycling in Italy, Italian cycling history, etc. are always welcome. Contact me at veronaman@gmail.com. There are more than 2,500 stories in this blog. The search feature to the right works best for finding subjects in the blog. There is also a translate button at the bottom so you can translate each page .
Posted by Angelo senza la o at 9:02 AM