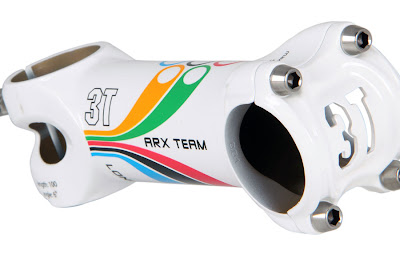 3T is launching a striking new edition of its road and MTB cockpit components to celebrate the Olympic champions who have won on 3T bars in the past 50 years.

Introducing the new livery, 3T chief executive René Wiertz said: “This London Edition honors all the champions that rode our 3T bars to victory during the past Olympic games."

Road and MTB sets
The London Editions are finished in brilliant, high-gloss white with a striking, asymmetric motif, suggestive of the prestigious rainbow colors: yellow, green, red, black, and blue. All items are sold as a package of bar, stem, and seatpost, one for Road, one for MTB.

3T was originally called Tecnologia del Tubo Torinese (Turin Tube Technology), taking its name from the city of Turin, where it was founded in 1961 by Mario Dedioniggi.

Stories for the Italian Cycling Journal about rides, granfondos, touring, having a good time cycling in Italy, Italian cycling history, etc. are always welcome. Contact me at veronaman@gmail.com. There are more than 2,500 stories in this blog. The search feature to the right works best for finding subjects in the blog. There is also a translate button at the bottom so you can translate each page .
Posted by Angelo senza la o at 4:06 AM