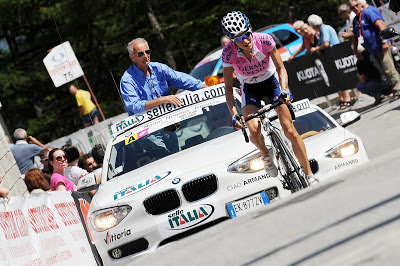 Mara Abbott has claimed her second stage win. After winning the maglia rosa at Monte Beigua yesterday, the American cemented her grip on the 2013 Giro Rosa title. During the stage from Terme di Premia to San Domenico (121 km), the USA national team managed to control the race when in the first kilometers the Olympic and world champion Marianne Vos tried to attack, as well as when later in the race nine riders tried to open up a gap.

The battle for the podium raged at full blast 10 kilometers from the finish line, where the Giro fans could cheer about the triumph of the USA team leader Mara Abbott, who created a gap of 24 seconds from the German Claudia Hauser (Tibco To The Top) and 34 seconds from Francesca Cauz (Top Girls Fassa Bortolo), best young rider of this Giro Rosa edition.

Fourth position for Fabiana Luperini (Faren Kuota), was ousted from the race after the stage due to violation of UCI art. 1.3.019b concerning minimum bicycle weight. Finishing 5th was Tatiana Guderzo (Cipollini Ale Galassia) who is going to wear the blue jersey (best Italian in the General Classification) given Luperini's disqualification.

Abbott: "What beautiful mountains you have in Italy! Thanks to my teammates I could tackle the race easily and ride at my best. Today was definitely an important stage, but Cremona is still far. We still have two more stages, and everything can change."

Hausler: "Mara, at the moment, is the best on climbs. I'm really happy for my second position. Finally I am back with the best ones."

Tomorrow's stage will be totally flat, suiting the Giro's sprinters and featuring a circuit to be repeated seven times in Corbetta in the province of Milan; 120 km.


Follow on Twitter: ITALIANCYCJOURN or receive an email when new content is added using the "Follow by Email" button on the right side column. With more than 2,900 stories in this blog the custom search feature (right column) works best for finding subjects in the blog. There is also a translate button underneath the search button.