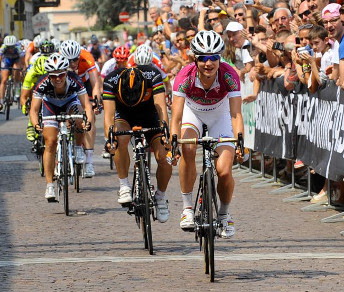 It had to be a sprint and so it was. At the finish line in Corbetta, it was a superb sprint and stage win for the olympic and world champion Marianne Vos (Rabo Woman Cycling Team), ahead of the 2-time world champion Giorgia Bronzini (Wiggle Honda) and of the American Shelley Olds (Team Tibco To The Top). After winning stage 3 in Cerro al Volturno and stage 4 in Castelfidardo, the incredible Vos stamped her authority once again over the 120m kilometer race which featured an 8-lap circuit, closing out what was a dominant stage racing performance in front of cheering crowds.

Vos: "It was a pity that I wasn’t able to battle for the Maglia Rosa this year, even though three stage wins aren’t bad at all with only one day to go from the finish of the race. I suffered on the long climbs but I gave my best every day to honor this spectacular race and the amazing public who is always ready to support us."

Bronzini: "I tried to catch up with Marianne 150 meters from the finish line but she was really unbeatable. No excuses, she’s the strongest and today she really wanted to get the stage win, as she had already lost the opportunity to place well in the General Classification. Concerning my race performance, I am really satisfied to have the great stage win in Pontecagnano Faiano in the bag and I’ve already finish on the podium twice."

Olds: "I was really happy today to be on the podium with champions like Bronzini and Vos. They were helped by their teams, while I had to do it all by myself. There are only 5 of us in the team now, that’s why our priority was to protect Claudia Hausler, who saved all her energy for tomorrow to aim at second place in the General Classification.".

Leader of the General Classification is Mara Abbott, who easily controlled the few attacks during today’s race together with her teammates from the USA National Team. "Until tomorrow, I won’t be sure to confirm the Giro Rosa victory. I will see you in 24 hours to comment on the Maglia Rosa that I am wearing," said Abbott. During tomorrow’s individual time trial in Cremona, she will have to watch out for Tatiana Guderzo, who gained 3 seconds by winning the intermediate sprint today.

The best Italian on the GC has to close a 2’28’’ gap to the USA team leader in only 16 km. It will be tough, but not impossible. The rest of the podium is still open: Marianne Vos will want to have her say during tomorrow’s time trial, she will be try to get at least a third place on the podium, where the German, Claudia Hausler, now sits.