The 105th edition of the Milano-Sanremo, which takes place on Sunday 23 March 2014, will see a changed race route: the ascent of Le Manie has been removed and is replaced by the climb of Pompeiana at the end of the race.

After the legendary 2013 edition, which saw a brutal snowstorm and was won in a spring finish by German Gerald Ciolek (Team MTN), the organisers, RCS Sport/La Gazzetta dello Sport, are making the Classicissima route more and more spectacular and unpredictable by removing the Le Manie ascent and the addition of the new 5km long Pompeiana climb between Cipressa and Poggio. The finish line itself remains unchanged on Lungomare Italo Calvino in Sanremo. 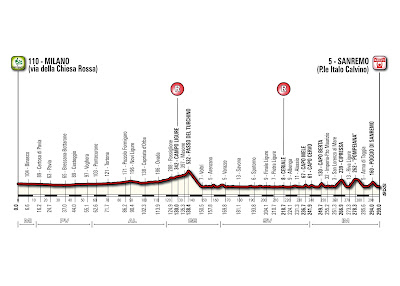 Pompeiana: Technical Details
3.5km after the descent of the Cipressa, the riders leave the Aurelia road and begin the start of the climb of the Pompeiana.

The climb, which is 5km long with an average gradient of 5% and a maximum of 14% at its steepest point, begins steadily at 6-7% before narrowing slightly, flattens and kicks with a very hard 500m section consisting of a pair left/right bends with a gradient between 10-14%.

A gradual slop follows on with a narrow track up to top of the climb, 20.7km from the finish, and then up to Castellaro. Here the twisty technical descent begins that takes the riders down to Arma di Taggia where the route re-joins the Aurelia and the historical race route. From here, there is just 4.4km of racing to be done before the start of the crucial Poggio climb.

Amateur Race
On the morning of Sunday 23 March, the day of the pro race, will be the “La Sanremo” amateur race. The amateurs will both start and finish from Sanremo (starting at 7am).

The amateur route will re-trace much of the final of the Milano-Sanremo route itself, with the Poggio as the attack springboard before the finish under the prestigious finish arc of the Lungomare Italo Calvino.

Email ThisBlogThis!Share to TwitterShare to FacebookShare to Pinterest
Labels: 2014 Milan-Sanremo