From Velo to Vino, Francesco Moser 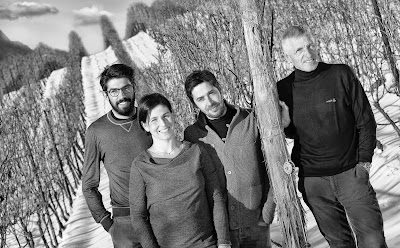 Wine Spectator's Katherine Cole sat down to interview Francesco Moser, his son Carlo—vice president of the Trento DOC, for an article that appears in the new issue of Wine Spectator magazine. Francesco Moser won the World Cycling Championship in 1977, the Paris-Roubaix three years in a row (1978-'80) and the Giro d'Italia in 1984. Today he runs his Azienda Agricola Moser in Trento with the help of two of his children and two nephews. The issue is on newsstands.

Museo Moser (Moser Museum) is located at the family vineyard of Maso Villa Warth in Gardolo (Trento). The museum is dedicated to the entire Moser family, from Trento, which has a long and successful history in professional racing.

In 1973, brothers Diego, Aldo, Enzo and Francesco were all on the Filotex professional team.

Aldo Moser raced in 16 Giro d'Italia, highest placed as 5th in 1956 and wearing the pink jersey for two days. He was 3rd in the Tour di Suisse in 1962. He won the Grand Prix des Nations in 1959 in the TT, and won several races of that level.

Enzo Moser wore the pink jersey in the Giro d'Italia for two days in 1964.