From New Zealand this story of an Italian cycling journey.

"Ask American cycling fans what they know about New Zealand, and if you’re lucky a few might know of Julian Dean, lead-out man for Garmin Cervelo’s Tyler Farrar and once called “the greatest lead-out man in the world” by Thor Hushovd. Ask Italians the same thing and they’re more likely to mention New Zealand’s world-beating All Black rugby team. While New Zealand is gaining some profile in the peleton, the country still remains an enigma for most people: 4 million people on two islands to the east of Australia. Best known for being the location of the Lord of the Rings movies, the Flight of the Conchords, and sheep. Lots and lots of sheep.

So consider the isolation of New Zealand back in the 1970s and 1980s; the dark days before the internet, when crocheted cycling gloves were de rigueur and helmets were for horse jockeys. Back then, New Zealanders could be forgiven for knowing as little about Italian cycling as Americans and Italians knew about New Zealand. Although track and road cycling was huge in pre-1970’s New Zealand, by 1983 it was firmly a niche sport. BMX had been the only fresh thing for years and triathlon and mountain-biking was yet to get started. Greg LeMond was three years from his Tour de France win and Breaking Away was just an oddity that had made the New Zealand film circuit for a brief few weeks four years before. 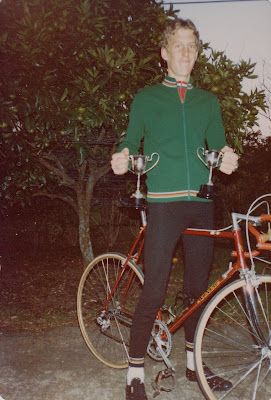 But take a look at this photo, from 1983 Auckland, New Zealand. Holding those cups for 1st place and fastest time is a lanky David Carman, astride his Italian hand-built Viner, wearing a woollen bike jersey in that ideal colour combination – red, white and green – that he had bought on an overseas holiday. In a country besotted with rugby and cricket, that 17-year old Carman may as well have been an Italian exchange student (or a student pretending to be one, a la Breaking Away).

Carman can’t quite pick what it was that sparked off his love of Italian cycling, but is adamant it wasn’t Breaking Away: “I can’t even remember seeing it – it was more to do with the riders of that time, the heroes like Francesco Moser, and the ones preceding them like Bartali and Coppi. To my cycling friends, the style and panache of Italian cycling was about as far removed as you could get from the thuggish rugby players that New Zealanders tend to adore. So like a lot of teenagers trying to rebel against the mainstream, we chose the opposite to what everyone else was following - Italian cycling”.

Fast-forward 25 years and Carman has forged his own business, working from his rural property in the adventure sport and mountain-biking capital of New Zealand, Rotorua. Carman’s Soigneur range of merino wool cycling jerseys celebrate the classic styles and heroes of professional cycling and he has customers throughout the world and within the pro peleton.

So how did Soigneur come to fruition? A qualified textile technician by trade, Carman sat down a few years back and asked himself how he could create a business that would survive against the Chinese clothing powerhouse. The answer? Carman simply decided to have a go at creating what he wanted the most himself – the best quality, most beautiful cycling jerseys that he and anyone else with a love of ciclismo moda would appreciate. 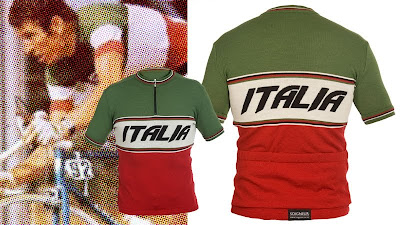 Check out www.soigneur.co.nz and you’ll see that Carman has certainly achieved what he set out to do – you’ll see a beautiful range of retro-styled hand-made merino wool cycling jerseys, paying homage to the greats – Coppi, Merckx, Anquetil, Gaul and Simpson, as well as one for Alpe d' huez and national jerseys for Switzerland and of course Italy – the first design Carman created.

Take a closer look and you’ll see that the jerseys are not simple replicas or cut-and-paste collections of old logos and brands. There’s no Molteni on the Merckx jersey and no Bianchi on the Coppi. Instead, you’ll find many of his jerseys emblazoned with the greats’ nicknames that only true tifosi will know – Le Cannibal; Campionissimo, M.Chrono and, more poignantly, the last words of Tommy Simpson on his jersey: “Go on, go on” (contrary to popular myth, Simpson’s last words weren’t “put me back on the bike” but for those preferring that legend then Carman will put those words on instead – how’s that for customisation?).

The Tommy Simpson jersey is Carman’s latest, and it marked a new design approach that he says worked well: “The Simpson jersey took a bit of work as there were a lot of potential design features that could have been used. So I put some early designs up on Facebook, took on board the comments, and came up with a much better design. It would be great if readers of Italian Cycling Journal became Facebook friends of Soigneur – that way they could all have a say in my future designs.” 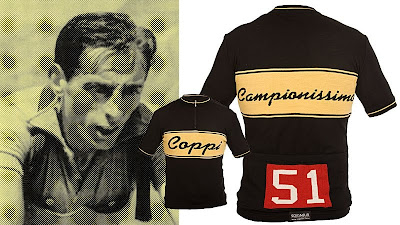 It’s certainly the details that matter with Soigneur jerseys. One of the Coppi jerseys is a case in point. On the back you’ll see what looks like a normal race number, but note the colour and the number itself for that added attention to detail – a red 51, red being the colour of the most aggressive rider and 51 being the number worn by more Tour de France winners than any other.

Another detail appreciated by the fortunate riders who wear the form-fitting Soigneur jerseys is the ultra-fine 19-micron merino wool used in their construction. Such fine merino is the world’s softest wool, making the jerseys tough yet incredibly soft and luxurious to the touch, while also in possession of the unparalleled temperature management of fine fibre wool – cool in summer, warm in winter (even when wet), and never getting smelly like artificial fibres do because of the lanolin that naturally coats the wool fibre. They can even be washed with your normal clothes in the washing machine – these are not the bulky, itchy woollen jerseys your grandmother used to knit!

The results are clear - when reviewed by crossbikereview.com, they gave their Soigneur jersey five out of five, and cyclingnewsasia.com concluded that “without question... it will be the best investment you can make”.

And invest people are certainly doing. One aspect of the Soigneur business that is especially successful is the custom-design jerseys that Carman creates. His jerseys are increasingly being used by race promoters looking for prestigious prizes of unique class, and bulk orders from clubs and tour groups are picking up – including one recently led by Eros Poli, famed lead-out man for Mario Cipollini.

With company like that that, the Soigneur label is a success story that Carman can be proud of. Who will next be commemorated in merino? Bartali? Binda? Gimondi? Check out www.soigneur.co.nz and be sure to let Carman know your preference..."

And, not only jerseys are made by David : 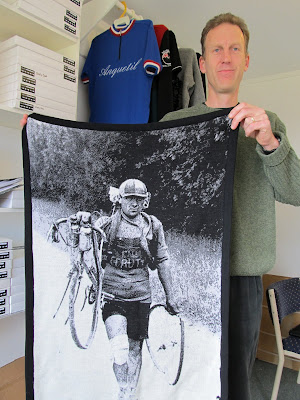 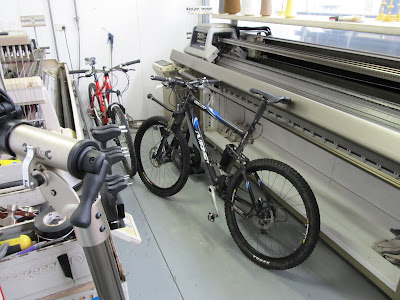 Email ThisBlogThis!Share to TwitterShare to FacebookShare to Pinterest
Labels: Soigneur