The Mortirolo, Marco and Me

Guest contributor Rich, a member of the Stockton Bicycle Club who was on a tour with CycleItalia, sends in his second contribution, this time about the Mortirolo and Gavia.

The Mortirolo, Marco and Me

"The Mortirolo has been called the toughest climb in pro cycling, and it is certainly the steepest and toughest I have encountered. Since we were tackling this climb, along with the Gavia, on our 10th consecutive day in the saddle, and since we had spent close to three hours climbing the Stelvio the day prior, John and I decided to sag the 30 km of mostly downhill and fairly busy roads to get to the start of the climb relatively fresh. It didn’t help much.

Everyone who has ridden Sierra Road outside of San Jose in California, thinks it is a hard climb, and it is. Sierra Road is 3.6 miles and climbs 1800 feet, which works out to about 9.2% average grade. But the Mortirolo is over twice as long (7.7 miles) and averages 10.2%. And the real killers are those 6 kilometers (3.7 miles) in the middle of the climb which average 12.4%. One of those kilometers is a whopping 14.5% average gradient. Even with a 34x32 low gear there are places where I had to stand to keep the bike moving. Sierra Road takes me something under 35 minutes to climb (my pr is 32:00) but the Mortirolo required 1:39 to do the 7.7 miles and climb 4150 feet.

I wanted to get to the Pantani Memorial, which is about 8 km into the climb, without stopping, and somehow I managed to do it. In 1994 Pantani wowed the tifosi with amazing attacks on the Mortirolo, and his memorial is different from the others we saw at the top of climbs with grand views of the mountains. Pantani’s monument is located at what appears to be just another unremarkable switchback of the 30 that make up this climb. It is wooded and shaded and there is no view at all. They say he put in the decisive attack on this corner, which is why his monument is here. Given the glory and disappointments of his career and his sad and tragic death from drugs and depression, it seems fitting that he should be remembered at a place where he fought to beat the mountain and his rivals and not on some grandiose summit crowned in glory.

The Pantani Memorial is sobering and I spent a good while there, taking pictures and thinking about how hard this sport can be and how much effort and determination are required from those who excel at it. Marco flew up the climb and the tifosi cheered; he died alone in a hotel room and the tifosi mourned the loss. I was also thinking about how amazing it was to be in a country where cycling could produce such passion that they build monuments to their heroes along the roads where they had their greatest moments.

Cyclists leave mementos at the monument. I didn’t leave anything, but I did get a picture with some SBC stuff and a Bicycle Café cap at the site. 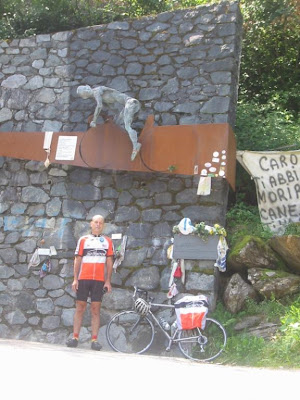 After the photo op, I continued up the climb, and the reduced gradient over the last 4 km, which averages ‘only’ 9.6%, allowed me to complete the climb without another break. And finally I reached the summit, which is in the middle of a cow pasture. I was more than glad to be done with this one, and I actually felt pretty good after it was over. Of course, that could all change on the Passo Gavia, which is the next climb of the day. 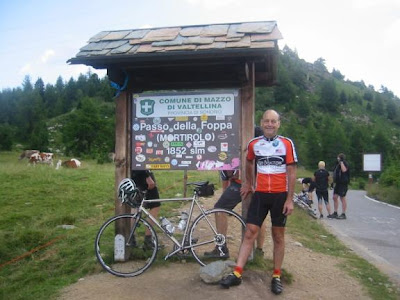 By the time we started down the Mortirolo, it was getting on toward lunch time, and since there really isn’t anywhere to eat on the Gavia we decided to have lunch and then sag the rest of the downhill to the base of the last big climb of the trip. I haven’t been car sick since I was in high school, but as our guide and grand prix driver Larry sped the van down the switchbacks like the ex motorcycle racer he is, I got queasy, and then a little more than queasy. I didn’t throw up but I felt as if I could at any moment. When we parked at the base of the climb, I wasn’t sure I could even stand up let along climb another HC monster. I was dizzy and nauseated and sweating, though the day was cool. Heather gave me a coke and some anti motion sickness gum, and I started up the climb feeling decidedly weak and just trying to keep the pedals turning. We started the climb at km 13 in the profile below.

The Gavia Pass became well known to Americans in 1988, the year Andy Hampsten won the Giro. He didn’t win the stage (Eric Breukink did) but he take over the maglia rosa by 15 seconds in a horrendous snowstorm. Bob Roll was on Andy’s team and wrote about the terrible conditions in his article ‘The Day the Big Men Cried’. And back then, the road wasn’t even paved!

Even though the entire climb is now smooth asphalt, and instead of snow we were enjoying another perfect day with sunshine, light winds and cool temperatures, I was still finding the climb plenty hard. I rode along with John most of the way. Usually I climbed a little faster than he did, but I was feeling awful and was happy to ride alongside him. The last 7 km or so are very scenic, with amazing views across the valley far below on your left to the spectacular peaks on the other side.

Larry warned us that a few guests had ‘freaked out’ in the tunnel 3 km from the top. The tunnel is 800 meters long, unlit and lacking in any windows. It is also uphill at around 9 percent, so it takes a good long while to get through. Because of the incline and a slight curve the exit isn’t visible for the first 500 meters or so, and it is very dark in there. Fortunately traffic was sparse, though a motorcycle did overtake us and the roar was deafening. Heather was driving the van behind us with her headlights on, which helped some. When we emerged into the light I was finally recovering and I finished the last 3 km of serious climbing on our trip feeling much better than I had at the bottom. I’m even smiling at the top knowing that only the shorter climb of the Madonna di Ghisallo remains for tomorrow and the big climbs are all behind me. And while I did sag a few descents and stretches of false flat roads which had a little more traffic, I did every climb of the tour on my bike. 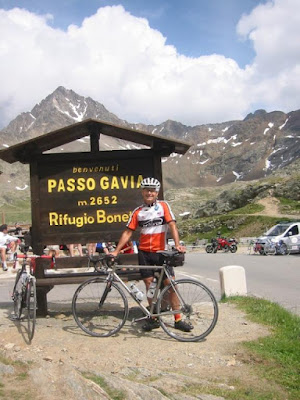 After my bout with car sickness I decided to ride down to Bormio on my bike, and I enjoyed the ride down until the road narrowed in a village, where two tourist busses had met in oncoming directions and couldn’t get past each other. I had to wait with the other cars while one backed up enough to find a spot wide enough to let the other one past. But after the slight delay I made it down to Bormio and managed to find my hotel. This was the last descent of the tour, and I made it down all of them without incident, even though I was pretty worried about the steep downhill roads before the tour started. Tonight I will celebrate with an extra glass of wine, since tomorrow there is only one short climb on the program, from Lake Como up to the Madonna di Ghisallo Chapel."

From The Day the Big Men Cried, by Bob Roll:

I grabbed a plastic hat, long-finger gloves, and Oakley Pilots and took off down the pass for Bormio, a mere 15 kilometers away. I thought I could ride 15 kilometers in any condition, at any time, anywhere on Earth. I have never been more wrong in my life.

After a brilliant climb, Van de Velde, forsaking extra clothes in order to gain time on the descent, was the leader on the road and had the pink jersey waiting for him in Bormio. Only 2 kilometers of descending later, Van de Velde was on his knees in tears. Savagely hypothermic, he crawled into a car to warm up. One hour later, he got out of the car and rode to the finish way outside the time limit....

Meanwhile, I kept my head down and hammered, following the tire grooves through the snow. After only 1 kilometer, I was bloody cold. After 2 kilometers, I was frozen to the core. After only 3 kilometers, I was laughing like a lunatic and passed Rolf Sorensen, screaming at the top of my lungs in an attempt to generate some warmth. After 5 kilometers, I was crying and about to slip into a frozen coma. About halfway down, I was not thinking straight and was making poor choices. At one point, I got off my bike and began to run back up the hill in a lame attempt to warm up.

Stories for the Italian Cycling Journal about rides, granfondos, touring, having a good time cycling in Italy, Italian cycling history, etc. are always welcome. Contact me at veronaman@gmail.com. There are more than 2,000 stories in this blog. The search feature to the right works best for finding subjects in the blog. There is also a translate button at the bottom so you can translate each page.
Posted by Angelo senza la o at 5:20 PM