Guest contributor Rich, who was on a tour with CycleItalia, continues his storytelling about the Legendary Climbs Tour.

In the 1970’s there were two feature films made by the Danish filmmaker Jorgen Leth about the Giro d’ Italia. “Stars and Watercarriers’ was the first, an account of the 1973 Giro. The lesser known film, about the 1974 Giro, is called ‘The Greatest Show on Earth’. This movie is short (only 75 minutes) and has fewer of the rather clumsy titles, cutaways and overly dramatic and oddly translated narration of the first movie. It also has lots of music to replace the dialogue, from a Verdi aria during a feature on Vincenzo Torriani, Lord and Master of the Giro, to a disco version of Gershwin’s ‘Summertime’ during a hot dusty stage.

“The Greatest Show” has a 10 minute segment near the end of the movie that features the dramatic climb of the Tre Cime di Lavaredo, which was the mountain top finish of the next to last stage of the race. Jose Fuente, who had been wearing the maglia rosa until he was dropped on the stage into San Remo and lost huge time, set out to prove he was the King of the Mountains and perhaps get back some of his GC losses.

In the movie, it is a cloudy and cool day and it gets cold on the way up the climb. Since it is late May there is still snow beside the road (there could be some in July too, as I learned), but the cold day has not stopped the tifosi, who are blanketing the roadside in huge, and widely enthusiastic, numbers.

At the steepest part, as we watch a few members of the grupetto struggling to stay upright and wondering what possessed them to become pro cyclists, the narrator speaks in a dry and emotion free voice the words that were running through my brain as I came past this point of the climb:

“The gradient is one in six. The temperature is minus two degrees (C). Three more miles to the top”

Well, it wasn’t minus two degrees C, it was more like 65 degrees F. But the gradient was in fact one in six (17%!) at least for a minute on my bike computer. And yes, there were three miles to the top.

The second day of our trip began by climbing the Passo Furcia, and after a break at the top to refuel we descended and continued through some rolling country to our lunch stop, where we were presented with two options. We could either ride to the hotel in Cortina, a 40 km jaunt with only one little climb and a long descent with a fair amount of traffic, or we could take on the Tre Cime climb, a mere 20 km but which would take much longer than the 40 km option and meant we would have to shuttle down from the top to reach the hotel in time to clean up and recover before dinner. Only John and I opted for the climb. John had done this tour the year before (a satisfied CycleItalia customer!) but had skipped the Tre Cime and wanted to do it this time. And this very climb was one of the reasons I came to Italy so I certainly wanted to give it a try.

I knew the climb was steep, but I hadn’t really studied it that closely. Looking at the profile below, I calculate the last 4 km average 11.9%. That is a pretty steep climb to finish off a day of 7300 feet of climbing in only 42 miles of riding. I think I flew up those last 4 km at about 6-8 km/hr. I was down in my 34x32 and thinking I should have brought even lower gears. But the scenery was incredible. I was trying to make it to the top without stopping, but after I passed our tour van which was parked at the steepest point, I came to my senses and paused ‘to admire the majesty of the Dolomites’. Exhaustion had nothing to do with it. From my perch one switchback above I could still hear our tour leader Larry calling ‘Forza!’ to riders going by and listen to ‘Nessum Dorma’ blaring from the van’s speakers. I was hoping that the Mozart Requiem wouldn’t be next.

As the refugio at the summit finally came into sight, I put on a burst of effort and reached the parking lot at the top, where I was met by a mass of busses and cars and motorcycles along with a few other cyclists. The Tre Cime Road is a dead end at a spot with one of the most beautiful views there is, and I asked a Dutch cyclist who had also made it up to take my picture. He obliged: 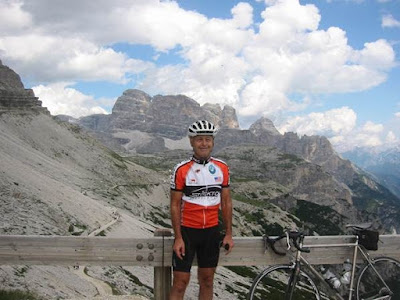 My riding partner John arrived at the summit a few minutes later, and we gawked at the view and took a few pictures and enjoyed a coffee before packing into the van for the shuttle to the hotel in Cortina. Since the other guests who had opted for the longer route with much less climbing would be arriving at the hotel soon, riding our bikes to Cortina really wasn’t an option, and when I saw the late afternoon traffic on the descent into town I was glad I was in the van. I thought this would be the steepest climb of the trip, but I was wrong, that honor was reserved for the Mortirolo. But this one was special too. I watched Merckx and Gimondi and Fuente and company climb this mountain in the movie, and now I had ridden up the same road. Just another ordinary day on the Legendary Climbs Tour.