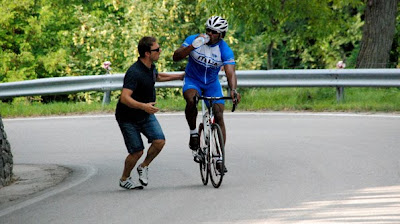 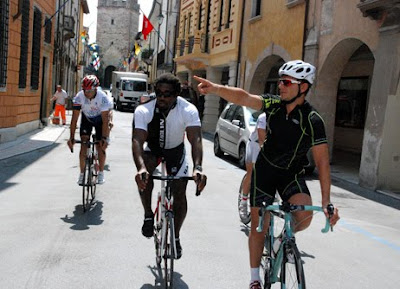 NFL linebacker Dhani Jones is best-known for his career in the NFL where, over the past eight years, he has played for the New York Giants, Philadelphia Eagles, New Orleans Saints and, currently, the Cincinnati Bengals. He is also the host and protagonist in the Travel Channel show "Dhani Tackles the Globe".

A short video (preceeded by a short advertisment) can be seen here.

The producer, Michael Strom, writes "The Italy shoot fell between the Iceland Strongman shoot and the Croatia Water Polo shoot. Even though this is Season 2 of Dhani Tackles the Globe, it still amazes me that Dhani can put his body through so much in such a short period of time, and do well no matter the sport. For Italy, Dhani was going to be doing cycling, something everyone thought might be a little bit easier on his body than let's say a wrestling type sport or a full contact team sport. Wrong.

Although it may not look like the "toughest" sport, it became clear that cycling not only would test Dhani's body to the limit, but also his mind. The Gran Fondo del Monte Grappa is 80 miles long, 17 of which are uphill at a steep incline. After one of Dhani's training climbs up Monte Grappa, it seemed like he'd rather be doing two-a-days in full pads.

Cristiano Citton, a two-time Olympic cyclist who was born in Bassano del Grappa, was Dhani's coach. He was a huge help in making Dhani feel comfortable on the bike, whether it be on training rides, steep climbs, or the intimidating Velodrome. Dhani and Cristiano formed a bond early on, being two athletes that, although they play different sports, share the same competitive fire and will to win that is inherent in most successful athletes.

Cristiano competed at the highest level of his sport, the Olympics, and Dhani has competed at the highest level in his sport, a Super Bowl. As Dhani says in the show, he couldn't have finished the race without Cristiano's help, and it seemed like on the race day climb up Monte Grappa, two athletes from different sports and different worlds were bonded together by a common goal and a shared experience.

While Dhani was struggling to get through the daunting race, the crew had some issues of our own to deal with. We had two main cameras. One would follow Dhani the entire way of what would be a six-hour ordeal. The other crew would get Dhani's start and finish, meet Dhani at points in between, and pick up some other footage of the race. The most surprising thing about race day, which made the shoot a bit more challenging, was that the roads were fully open. There were cars and other race vehicles following the cyclists as part of the event, while other cars and buses with no ties to the race passed the riders. Then there was oncoming traffic as well. Add those thin Italian roads to the mix and the result is a hectic and tight scene. But we ended up getting the footage we needed and there were no accidents to report."

There are actually nine ways to the top of Monte Grappa, all challenging. Some of these are discussed in this previous story. More recent is a story about climbing the route known as the "Salto della Capre", read about it here. My own favorite story involving climbing Monte Grappa was a chance encounter on the bridge in the town of Bassano del Grappa.

Stories for the Italian Cycling Journal about rides, granfondos, having a good time cycling in Italy, Italian cycling history, etc. are very welcome. Contact me at veronaman@gmail.com. There are more than 1,300 stories in this blog. The search feature to the right works best for finding subjects in the blog and there is also a translate button at the bottom so you can translate each page.
Posted by Angelo senza la o at 6:21 PM