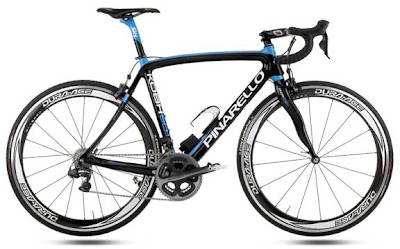 Information from Range re: the new Pinarello KOBH 60.1 which should be arriving in shops in July, 2010:

"Cycling fans were abuzz this week, as Pinarello officially unveiled the KOBH 60.1 frameset. It was seen during some of the more hardcore races, including the upcoming Paris-Roubaix, which punishes unprepared riders thanks to the cobble stone paths. KOBH is pronounced “cob”, which is short for cobblestones.

Apparently, the KOBH 60.1 has been developed in parallel to the Dogma. The 60.1 moniker means that it shares the same type of carbon fiber from Torayca.

The difference resides in the fact that the KOBH 60.1 was developed for some of the classic races of Northern Europe. The new geometry, which Pinarello have dubbed "CenturyRide", will provide more shock absorption. The KOBH has the same lateral stiffness as the Dogma. It’s got relaxed seat and head tube angles, as well as a longer head tube. The fork rake is longer too. The frame also has better wheel clearance, which means that it can accept 28mm tires.

The bike is designed to offer more comfort and be less harsh for longer races. Team Sky will be using the KOBH this year at the Paris-Roubaix. It will be sold starting in July and will be available with Shimano Dura Ace Di2-internal routing or traditional cable routing.

Visually, the bike differs from the Dogma most significantly by its seatstays. The Dogma has got a double s-bend Onda seatstays, whereas the KOBH has got flatter and radial curved stays. This is similar to the ones that are used by Cervélo in the R3, RS, as well as Ridley with their Excalibur. Pinarello calls them AFS, or asymmetrical frame system, meaning that they are asymmetric in order to maximize the KOBH’s resistance to flex under rider power.

Stories for the Italian Cycling Journal about rides, granfondos, having a good time cycling in Italy, Italian cycling history, etc. are very welcome. Contact me at veronaman@gmail.com. There are more than 1,300 stories in this blog. The search feature to the right works best for finding subjects in the blog and there is also a translate button at the bottom so you can translate each page.
Posted by Angelo senza la o at 5:36 AM