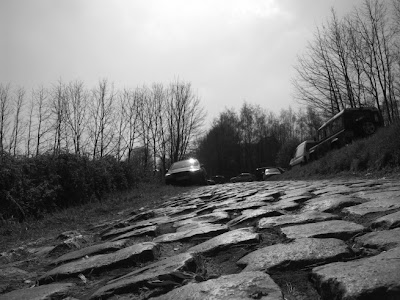 Tomorrow is the 94th edition of the Tour of Flanders (Ronde van Vlaanderen), a one day road race that is one of the "monuments" of cycling. The race distance is 262km with 15, mostly cobbled, climbs. It's a hugely important race for Belgian riders and a visual spectacle for fans.

Two Belgian riders have a chance to win their third Tour of Flanders this year: Tom Boonen who won in 2005 and 2006, and Stijn Devolder who had consecutive victories in 2008 and 2009 and who could tie Magni's record.

Definitely a race not to miss.

Photo: one of the climbs in the race

Stories for the Italian Cycling Journal about rides, granfondo, having a good time cycling in Italy, Italian cycling history, etc. are very welcome. Contact me at veronaman@gmail.com. There are more than 1,300 stories in this blog. The search feature to the right works best for finding subjects in the blog and there is also a translate button at the bottom so you can translate each page.
Posted by Angelo senza la o at 4:21 AM