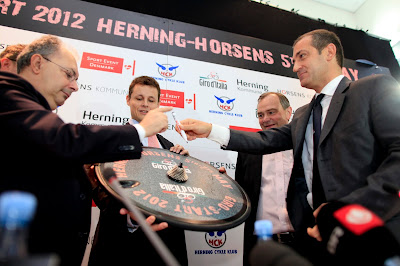 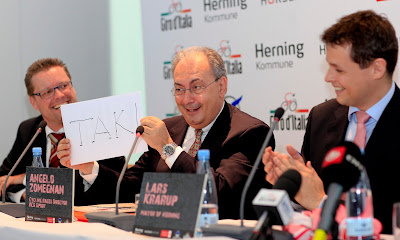 For the first time in cycling history, a major stage race will start from Scandinavia. It will be the Giro d'Italia 2012. Denmark was chosen as the site of the first three stages of the Giro in 2012, which begins Saturday, May 5 with an individual time trial starting and finishing in the town of Herning in the middle of the peninsula of Jutland.

During the press conference held today at the end of the official ceremony of the signing of the agreement between RCS Sport, La Gazzetta dello Sport and the Danish authorities sponsoring the project, the CEO of RCS Sport Giacomo Catano stressed the importance of highlighting the mutual benefits that will accrue, "We are very pleased with the willingness and professionalism that the Danish authorities have shown in the design and proposal for the Giro d'Italia in their country. In turn, RCS Sport will harness this commitment and give great prominence and visibility to the start in Denmark, reaching all the fans of the Giro which today number more than 300 million worldwide. We want to offer an opportunity to showcase this beautiful country and its wonderful people, famous for its hospitality and lifestyle. Our slogan is: "The Toughest Race in World's Most Beautiful Place Meets The Happiest Country in the World!".

Director of the Giro d'Italia, Angelo Zomegnan, said, "The signing of this agreement lays the foundations for a great start of the Giro d'Italia in the northern most point ever recorded for the Corsa Rosa. The ambition of Denmark together with the great experiences of Holland in 2010 make us believe that the three days designed for Hering and Horsens will represent another milestone in the globalization of the Giro and Danish cycling as moments of excellence."

The creator of the initiative that brought the Giro d'Italia to Denmark, Joachim Andersen, highlighted the future prospects that the start will open both for the Italian organizers and the host cities, "Our Italian partners have the unique opportunity to present the Corsa Rosa to the vast audience of cycling enthusiasts in northern Europe. In addition to Denmark, I think of Germany, Norway and Sweden. This has been a cornerstone of the proposal that we presented and that allowed us to bring the Giro to Denmark."

Lars Lundov, Managing Director of Sport Event Denmark, showed his satisfaction in helping to succeed in this new landscape of sporting events in Denmark, "The start of the Giro d'Italia added another diamond to the crown of large, prestigious cycling events which will take place in Denmark this year. Denmark will host the BMX world championships, world championships of para cycling , and not least the world championship road cycling, a moment of absolute importance in international sport. The start of the Giro is yet another moment for the global promotion of Denmark as an organizer of major cycling events."

With Washington D.C. having lost the bid for 2012, plans have now shifted by the organizing group to bring the race there in 2013 or 2014.

Stories for the Italian Cycling Journal about rides, granfondos, having a good time cycling in Italy, Italian cycling history, etc. are always welcome. Contact me at veronaman@gmail.com. There are more than 1,800 stories in this blog. The search feature to the right works best for finding subjects in the blog. There is also a translate button at the bottom so you can translate each page.
Posted by Angelo senza la o at 7:51 AM