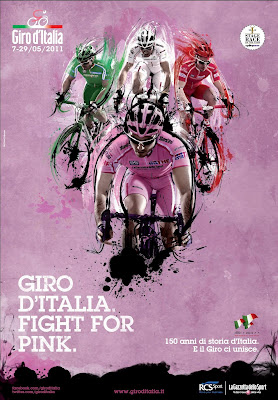 The 2011 Giro d'Italia campaign officially gets underway today with the slogan "Giro d’Italia. Fight for Pink. 150° Italia Unita", and the graphic pictured above.

The graphic was created by the McCann Erickson agency.

The pink jersey was designed by Jonny Mole and features a tricolor collar and a tricolor stripe on the front with "150".

The start of the 94th edition of the Giro d'Italia will take place in Turin on May 7th with a 22km team time trial. The race, one of the three nationally designated events for the 150th anniversary of the unification of Italy, will touch 17 Italian regions, more than 60 provinces and 550 municipalities. The final action will take place in Milan, Sunday, May 29, with an individual time trial.

Stories for the Italian Cycling Journal about rides, granfondos, having a good time cycling in Italy, Italian cycling history, etc. are always welcome. Contact me at veronaman@gmail.com. There are more than 1,800 stories in this blog. The search feature to the right works best for finding subjects in the blog. There is also a translate button at the bottom so you can translate each page.
Posted by Angelo senza la o at 5:28 AM